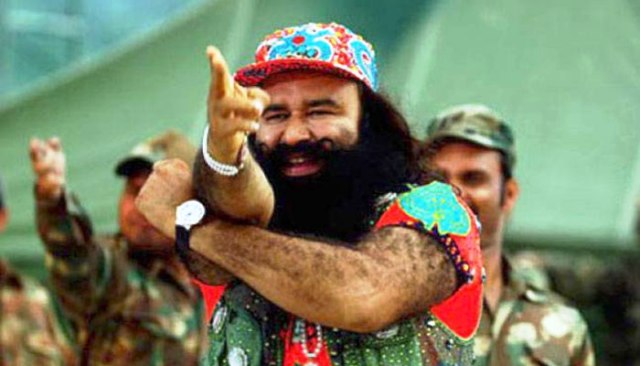 The Chief Minister said 'strict action' will be taken against those who will attempt to disrupt peace in the state.

"Briefed @rajnathsingh ji. Situation is being monitoring extensively, strict action will be taken against those who try to disrupt peace," the Chief Minister tweeted.

He had earlier urged people to maintain peace in Haryana.

According to media reports, the people, who gathered in huge numbers around the court house in Haryana's Panchkula, adjoining the Pujab border, turned violent, Pelting stones, attacking the outdoor broadcasting vans of two media houses, injuring an engineer and chasing away the journalists present there.

They also reportedly set fire to a fire brigade engine and clashed with police.

The court reserved its order for the quantum of punishment for August 28 and the self-styled Godman was taken into custody.

He faces a jail term up to seven years.

The verdict passed by Justice Jagdeep Singh, came amid a heightened tension with massive security forces, including the Army, being deployed ahead of the verdict to maintain peace in case of a sectarian frenzy.

Tens of thousands of Dera followers had started taking to the street since Wednesday, much ahead of verdict, prompting the state Governments of Haryana and Punjab to take an unprecedented security measure to prevent any sectarian frenzy.

The sect claims to have sway over million of people.

The Haryana government imposed an indefinite curfew in Sirsa as a precautionary measure and a 72-hour ban on mobile internet services, except voice calls.

As many as 72 trains have been cancelled in view of the law and order situation.

The Centre has extended its support and provided security in both the states.

Twenty columns of army, 53 companies of paramilitary forces and 50,000 policemen have been deployed in what came as an unprecedented preventive measure.

The CBI had filed an FIR against the self-styled God man, accusing him of raping two ‘sadhvis’ (female followers), in 2002 and the case came to trial in 2008.

The CBI move came after the Punjab and Haryana High Court took suo moto action on the basis of a letter written by one of the alleged victims to the then Prime Minister Atal Behari Bajpayee.

On the last day of the hearing, the court had directed Gurmeet Ram Rahim  him to appear before it at 2.45 pm on Friday — when the verdict is likely to be announced.