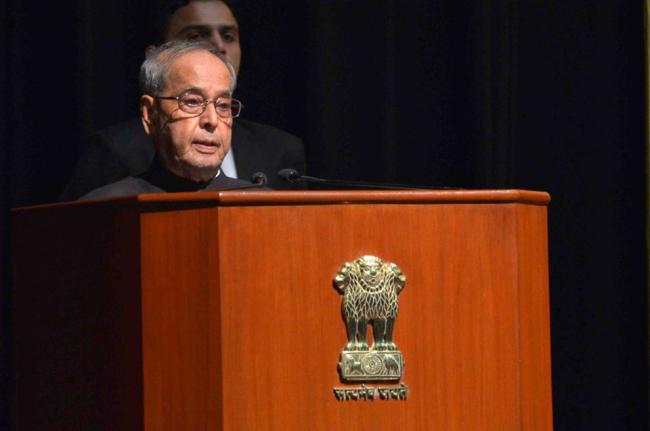 I will be judged by the critical lens of history: Pranab Mukherjee

India Blooms News Service | | 24 Jul 2017, 08:47 pm
#President, # PranabMukherjee, # FarewellSpeech
New Delhi, July 24 (IBNS): President Pranab Mukherjee, whose tenure as the first citizen of the nation has nearly come to an end, on Monday said his performance will be judged over the time in the critical lens of history.

"How successful I was in discharging my responsibilities will be judged, over the time, by the critical lens of history," Mukherjee said in his farewell speech to the nation.

Mukherjee said he had an opportunity to learn each day during his tenure as the President.

Mukherjee will vacate his office on Tuesday at 12:15 as the President-elect Ram Nath Kovind will take the charge.

Speaking about his experiences in the last five years at the office, the outgoing President said: "I learnt from the travel across the country, discussions and conversations with young, bright minds, innovators, scholars, authors, artists, jurists which kept me focussed."

"Each day I was conscious of my responsibility," Mukherjee said.

The outgoing President was a Congress leader for decades and also held several important portfolios in the Central government like finance and defence ministries earlier.

Mukherjee remembered his past fifty years being in the field of politics, holding important portfolios and also as the President when he said: "I considered Constitution as my sacred text, Parliament as temple and my passion was to do service of the people."

Thanking the people of the country, the President said: "Always believed that I was receiving much more from people of this country that I could give them."

"I am overwhelmed by the feelings of gratitude towards the people of this country," he added.

The swearing-in ceremony of President-elect Ram Nath Kovind will be held on July 25 at 12:15 pm.

Full Text of President Pranab Mukherjee's speech is given below:

On the eve of stepping down from office, I am overwhelmed by a deep sense of gratitude for the people of India, their elected representatives and the political parties for the trust and confidence they reposed in me. I am humbled by their kindness and affection. I have received much more from the country than I have given. For that, I will remain ever indebted to the people of India.

I congratulate and extend a warm welcome to Shri Ram Nath Kovind, the President-to-be and wish him success and happiness in the years to come.

Our founding fathers, with the adoption of Constitution, set in motion powerful forces that liberated us from the stranglehold of inequity in gender, caste and community along with other fetters that had tied us for too long. It inspired a social and cultural evolution which put Indian society on the track to modernity.

A modern nation is built on some essential fundamentals - democracy or equal rights for every citizen, secularism or equal freedom to every faith, equality of every region, and economic equity. For development to be real, the poorest of the land must feel that they are a part of the nation’s narrative.

Five years ago, when I took the oath of office of the President of the Republic, I promised to preserve, protect and defend our Constitution, not just in word but also in spirit. Each day of these five years, I was conscious of my responsibility. I learnt from my travels across the length and breadth of the country. I learnt from my conversations with young and bright minds in colleges and universities, scientists, innovators, scholars, jurists, authors, artists and leaders from across the spectrum. These interactions kept me focused and inspired. I strove hard. How successful I was in discharging my responsibilities will be judged, over the time, by the critical lens of history.

As one advances in years, so does one’s propensity to sermonize. But I have no sermon to make. For the past fifty years of my public life, -

My sacred text has been the Constitution of India;

My temple has been the Parliament of India; and

My passion has been the service of the people of India.

I want to share with you some truths that I have internalized in this period:

The soul of India resides in pluralism and tolerance. India is not just a geographical entity. It carries a history of ideas, philosophy, intellect, industrial genius, craft, innovation and experience. Plurality of our society has come about through assimilation of ideas over centuries. The multiplicity in culture, faith and language is what makes India special. We derive our strength from tolerance. It has been part of our collective consciousness for centuries. There are divergent strands in public discourse. We may argue, we may agree or we may not agree. But we cannot deny the essential prevalence of multiplicity of opinion. Otherwise, a fundamental character of our thought process will wither away.

The capacity for compassion and empathy is the true foundation of our civilization. But every day, we see increased violence around us. At the heart of this violence is darkness, fear and mistrust. We must free our public discourse from all forms of violence, physical as well as verbal. Only a non-violent society can ensure the participation of all sections of the people, especially the marginalized and the dispossessed in the democratic process. Power of non-violence has to be resurrected to build a compassionate and caring society.

Protection of the environment is essential for our survival. Nature has been kind to us in its bounty. But when greed exceeds need, nature lets loose its fury. We often see some parts of India affected by devastating floods while others reel under severe drought. Climate change has put farming sector under tremendous stress. Scientists and technologists have to work with millions of farmers and workers to revive the health of our soil, arrest the decline in water table and restore the ecological balance. We all have to act together now for the future may not give us another chance.

As I had said on assuming the Office of the President, education is the alchemy that can take India to its next golden age. A reordering of society is possible through the transformative power of education. For that, we have to upgrade our higher institutions of learning to world-class levels. Our education system must accept disruption as a norm and prepare our students to manage and build upon the disruptions. Our universities should not be a place for rote-memorizing but an assembly of inquisitive minds. Creative thinking, innovation and scientific temper have to be promoted in our institutions of higher learning. It calls for application of logic through discussion, argument and analysis. These qualities have to be cultivated and autonomy of mind has to be encouraged.

For us, creation of an inclusive society has to be an article of faith. Gandhiji saw India as an inclusive nation where every section of our population lived in equality and enjoyed equal opportunity. He wanted our people to move forward unitedly in ever-widening thought and action. Financial inclusion is at the core of an equitable society. We must empower the poorest of the poor and ensure that the fruits of our policies reach the last person in the line.

To lead healthy, happy and productive lives is the basic right of our citizens. Happiness is fundamental to the human experience of life. Happiness is equally the outcome of economic and non-economic parameters. The quest for happiness is closely tied to the quest for sustainable development, which is the combination of human well-being, social inclusion and environmental stability. Eradication of poverty would provide a strong boost to happiness. A sustainable environment would prevent damage to the planetary resources. Social inclusion would ensure access to the fruits of progress to all. Good governance would provide the ability to people to shape their own lives through transparent, accountable and participatory political institutions.

During my five years in Rashtrapati Bhavan, we tried to build a humane and happy township. We found happiness that is associated with joy and pride, smiling and laughter, good health, feeling of safety and positive actions. We learnt to wear a smile always; to laugh at life; to connect with nature and get involved with the community. And then, we extended our experience to a few villages in the neighbourhood. The journey continues.

As I get ready to leave, let me repeat what I said in my first Address to the Nation on the eve of Independence Day 2012: “Words cannot adequately express my gratitude to the people and their representatives for the honour of this high office even as I am deeply conscious of the fact that the highest honour in our democracy does not lie in any office but in being a citizen of India, our motherland. We are all equal children before our mother and India asks each one of us in whatever role we play in the complex drama of nation building to do our duty with integrity, commitment and unflinching loyalty to the values enshrined in our Constitution”.

When I speak to you tomorrow, it will not be as the President but as a citizen– a pilgrim like all of you in India’s onward march towards glory.