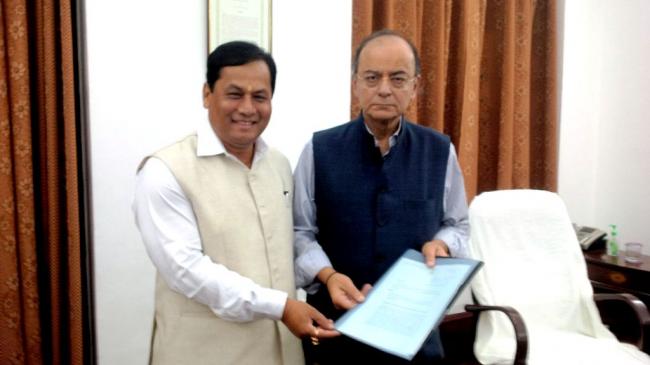 Taking up the issues as a follow-up meeting with the Prime Minister on
Tuesday, Chief Minister Sonowal requested Finance Minister Jaitley to
help the State by all possible means to tackle the unprecedented and
unusually long wave of floods this year.

In this context, the Chief Minister sought the intervention of the
Finance Minister for releasing Central share of Rs 1138 crore under
the Flood Management Programme (FMP) during the 11th and 12th Five
Year Plans. The State has already released its share against 141
schemes under FMP.

Expressing his deep gratitude to the Finance Minister for extending
support during GST implementation in Assam, Sonowal urged Jaitley not
to restrict the refund of CGST, IGST incentives to industries to 58
per cent but to continue with the earlier policy of 100 per cent
duties, taxes during the last three years of the 14th Finance
Commission Award and under the North East Industrial and Investment
Promotion Policy (NEIIPP), 2007.

“We are in the third year of the 14th FC Award and 100 per cent refund
has been given in the past three years. Thus restricting the refund to
the industries to 58 per cent is not appropriate,” Sonowal said.

In the same vein, the Chief Minister urged the Finance Minister for
his intervention for formulation of a New Industrial Policy on the
lines of NEIIPP, 2007 to keep the flow of investment in Assam and the
North East as a whole.

More than Rs.6,500 crore have poured into the State during the first
11 months of the present dispensation at Dispur under NEIIPP, 2007.

“In order to keep the momentum of investment in Assam, it is necessary
that a New Industrial Policy is announced at the earliest,” Sonowal
said.

Assam government has already submitted a proposal for the proposed
bridge to the New Development Bank.

The Assam CM also apprised the Finance Minister about the negotiations
going on with the World Bank for funding of USD 300 million Assam
Agribusiness and Rural Transformation Project.

Extending his heartfelt thanks to the Finance Minister for resolving
the oil royalty issue by paving the way for clearance of the first
installment amounting to Rs.948 crore in 2016-17, Sonowal requested
Jaitley for immediate release of Rs.2,844 crore oil royalty arrear
from the Ministry of Petroleum and Natural Gas as per the agreement
with the Government of Assam during the current financial year.

The Assam CM also urged the Finance Minister to prevail upon NABARD to
enhance the normative allocation to Assam under RIDF to Rs.1500 crore
during the current financial year. NABARD has indicated an allocation
of Rs.800 crore only.

“I earnestly request you to advise NABARD to give priority to Assam as
we are confronted with serious rural connectivity challenges,” Sonowal
said.

The Assam CM briefed the Finance Minister how his Government had laid
great emphasis on ensuring utilization of RIDF funds to the tune of
Rs.850 crore in 2016-17, which have had never crossed more than Rs.450
crore annually till 2015-16.

Sonowal requested Jaitley to persuade NABARD to enter into a special
MoU with the Assam government to fund various infrastructure projects
with low interest rates apart from RIDF.

At the end of the 15-minute meeting, Finance Minister Jaitley assured
all possible help and support to Chief Minister Sonowal to put the
State on the higher growth trajectory by addressing all the issues
raised by him.