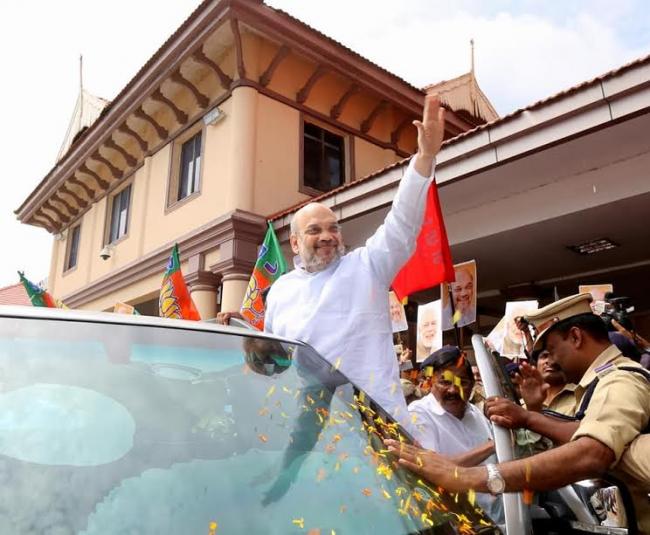 India Blooms News Service | | 02 Jun 2017, 10:08 pm
#AmitShah, #KeralaVisit, #BeefRow, #CattleSaleBan, #PinarayiVijayan
Thiruvananthapuram, June 2 (IBNS): Amidst the beef row in the state of Kerala and the protest against the notification issued by the central government that bans the cattle trade, Bharatiya Janata Party (BJP) president Amit Shah began his three day visit to the state, according to media reports on Friday.

Shah is currently touring various states of the country with an aim to strengthen the organisation of the party ahead of the 2019 Lok Sabha election.

The state of Kerala had witnessed a protest on Sunday after the Centre issued a notification to ban the sale of cows and buffaloes in the animal markets.

According to a report from NDTV, a group of students of  IIT Madras participated in a "beef festival" in the institution premises on Sunday night protesting against what they called "BJP's imposition of communal agenda on the masses."

The protesting students, belonging to the Progressive Students' Union of the IIT, also discussed the Central government's recent ban on sale of cattle for slaughter at cattle markets.

The Centre recently notified a Prevention of Cruelty to Animals (Regulation of Livestock Markets) Rules, 2017 that said that the member secretary of an animal market committee will have to ensure that no one brings a young animal to the slaughterhouse.

"The prime focus of the regulation is to protect the animals from cruelty and not to regulate the existing trade in cattle for slaughter houses. It is envisaged that welfare of cattle dealt in the market will be ensured and that only healthy animals are traded for agriculture purposes for the benefits of the farmers. The livestock markets are intended to become hubs for trade for animal for agriculture through this process and animal for slaughter will have to be bought from the farmers at the farms. The notified rules will remove the scope of illegal sale and smuggling of the cattle which is a major concern. The specific provisions apply only to animals which are bought and sold in the notified live stock markets and animals that are seized as case properties. These rules do not cover other areas," the central government said in a statement.

The move by the central government was also criticised by the Kerala CM, Pinarayi Vijayan.

The Kerala CM was quoted saying: "Delhi, Nagpur can't decide what we eat."

Banerjee on Monday, said: "This law is unconstitutional, undemocratic and against the federal structure. They have introduced the law in the month of Ramadan without taking the views of the state governments."

"People from all religions are living happily here in Bengal. Centre can never decide what to eat and what not," she added.

Apart from the criticisms, some leaders of Meghalaya state unit of BJP gave tough time to the national leadership by announcing a beef party to celebrate the third anniversary of Modi government in power at the Centre.

The announcement of beef party came from the former West Garo Hills district president of the BJP, Bernad N Marak, who resigned on Thursday.

West Bengal and Jammu & Kashmir were some of the states where Shah visited recently.

With an eye to ride to power in the states of WB, Shah even claimed that the saffron party will form the future government in the state and will emerge as the largest party in the 2019 Lok Sabha election.