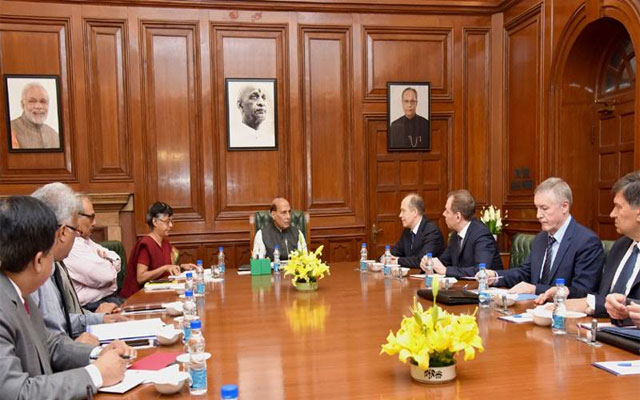 Rajnath Singh informed the visiting delegation that India and Russia are all weather friends and enjoy family like relations.

He said that our bilateral relations had withstood all trying times in the midst of changing nature of international and political relations.

Rajnath Singh said that the Indian Prime Minister Narendra Modi and the Russian President, Vladimir Putin, have been meeting on different occasions to share and strengthen the bilateral cooperation at the highest level.

He also mentioned that the Russian President is loved and respected by all Indians.

During the course of Delegation level meeting lasting for about 45 minutes, the Home Minister highlighted the sponsoring of terrorism by our neighbouring country, which is a threat not only to India and international community but to the humanity as a whole.

Singh reiterated that India has a policy of zero tolerance for terrorism.

He further emphasised that bilateral cooperation should include the areas of military and technical cooperation, energy sector, economic security and disaster management, and urged that the strategic cooperation between the two countries needs to be strengthened further.

He also mentioned that during the ensuing visit of Indian Delegation to Russia, he would make it a point to visit facilities such as the EMERCOM headquarters to explore areas of technical cooperation between the two countries.

The two sides also acknowledged that there may be some ‘unfriendly forces’ or ‘unfriendly actors’ who may be trying to create hindrances in the bilateral relationship but such adverse campaigns are incapable of affecting the deep understanding bolstered by regular dialogues and mutual cooperation.

The Russian delegation extended an invitation to the Union Home Minister to participate in the XVI International meeting of the Heads of Special Services, Security Agencies and Law Enforcement Organisations in Russia later this year, which the Home Minister accepted.

The Russian delegation included the representatives from FSB’s Departments of Constitution Protection and Counter Terrorism, Intelligence Analysis and International Liaison and Scientific & Technical.