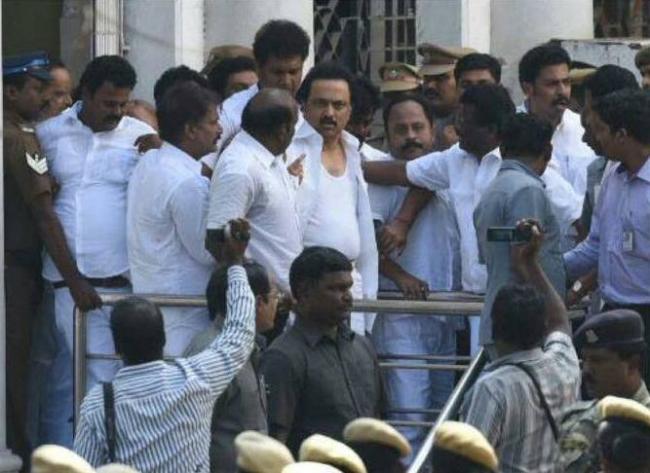 India Blooms News Service | | 19 Feb 2017, 02:13 pm
#Tamil Nadu, #Trust vote, #DMK, #Hunger strike, #MK Stalin, #FIR
Chennai, Feb 19 (IBNS): The Dravida Munnetra Kazhagam (DMK) party on Sunday called for a hunger strike on Feb 22 at all of its district offices in Tamil Nadu to protest against the forceful eviction of its MLAs from the state Assembly during the trust vote, media reports said.

The strike was called at a special meeting of MLAs, which was convened by DMK working president M K Stalin at the party headquarters.

This comes a day after police registered an FIR against Tamil Nadu opposition leader MK Stalin following agitation by the lawmaker and his men after chief minister Edappadi K Palaniswami's win in the floor test.

During the ruckus on Saturday, Stalin stole the lime light as he led his brigade to a rampage plunging the Assembly into a chaos and lawlessness.

They were finally evicted by marshals and police following an order by the Speaker, but Stalin had alleged that he was attacked.

He had led his MLAs to the Raj Bhavan and met Governor C Vidyasagar Rao to lodge a complaint about the democracy being "murdered."

He was arrested from Marina Beach, where he sat on a hunger strike in front of the Gandhi statue.

Following Stalin's arrest, violence swept across the state as DMK workers protested the move from police.