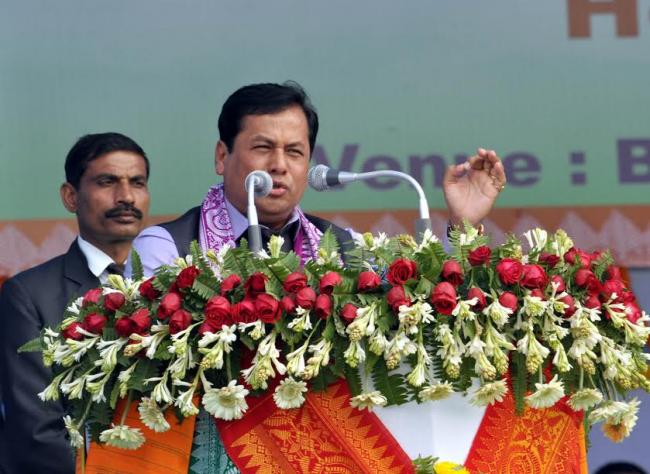 India Blooms News Service | | 10 Feb 2017, 08:18 pm
# Assam, #AssamChiefMinister, #Sarbananda Sonwoal
Guwahati, Feb 10 (IBNS) : Assam Chief Minister Sarbananda Sonwoal on Friday said that Assam is a melting pot of several tribes and ethnic groups and it has been a constant endeavour of the State Government to integrate the contributions of all tribes and ethnicities to bring about all pervasive development of the State.

He also said that the present BJP led State Government which is representing various ethnic groups is also working relentlessly to speed up equal development of all tribes and ethnic groups to make Assam a stronger State.

Speaking as the Chief Guest in the 15th Bodoland Day at Bodofa Nwgwr on Friday, Sonowal said that we want peace and harmony among all living in Assam, as through harmony strength is generated and through strength change can be achieved.

Hailing the advent of positive  changes that have ushered in the BTAD areas under the leadership of the BTC Chief Hagrama Mohilary, Sonowal said that it is through harmony among all sections of the people living in the BTAD areas change has been made possible.

He also said over the last 15 years BTAD areas have undergone an overall transformation where people belonging to all ethnic groups are living in total peace and cordiality.

Outlining his Government’s commitment to Sabka Saath Sabka Vikash, Sonowal said that the State Government has been taking all sections of the people into confidence before taking any major decision as the budget 2017-18 recently presented in the State Assembly adequately reflected that. While preparing the budget, aims and requirements of all sections of the people were taken into cognizance by consulting with various groups.

Sonowal also lauded the role of the Bodos in enriching the composite culture of the State.

He maintained that if Assam has to shine Bodo people have to contribute significantly.

Emphasizing his Government’s commitment to the development of BTAD areas, Chief Minister Sonowal said that his government would provide all support for the infrastructural development of BTAD areas. He also informed that special emphasis has been laid on the improvement of health, education and communication sectors, as different projects are on the pipeline to give a fillip to technical education, health care delivery system and network of communication system including roads, flyovers etc.

The Assam CM also reiterated that the State Government is hell bent towards protection and welfare of all sections of the people of Assam as he sought cooperation from everybody to make Assam free from terrorism, illegal migration, corruption and pollution.

Sonowal also paid rich tributes to Bodofa Upendra Nath Brahma along with others who laid down their lives in the Bodo Movement.


He also felicitated anjali Basumatary, Masoom Narzary and Halicharan Narzary for their outstanding contributions in their respective fields.


Earlier, BTC Chief Hagrama Mohilary while speaking on the occasion thanked all groups for extending support towards signing the BTC Accord way back in 2003.

He sought the cooperation from all sections of the people living in BTAD areas to bolster development.

He also said that in 15 years, BTC has scripted exponential growth in road and communication, health, education and vowed to carry forward its unrelenting mission to bolster development in the BTAD areas. 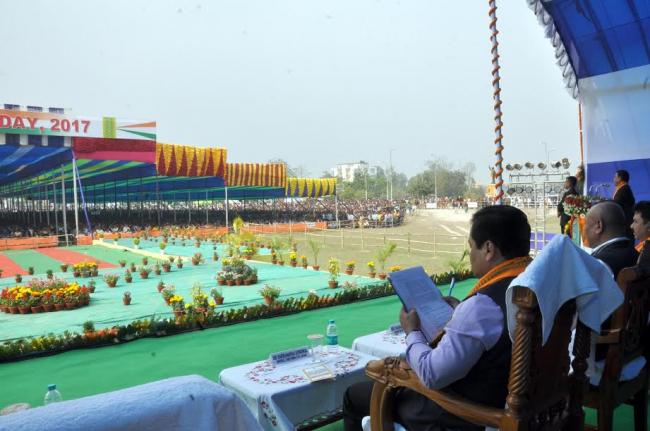 Hagrama informed that the families of martyrs of Bodo Movement will be given financial aid in recognition to their unparallel sacrifice.

Hagrama also endorsed his support to the demand of six communities for ST status.

It may be noted that Bodoland Territorial Council was created consequent upon signing of Bodo Accord between Government of India, Government of Assam and the BLT on 10th February 2003.