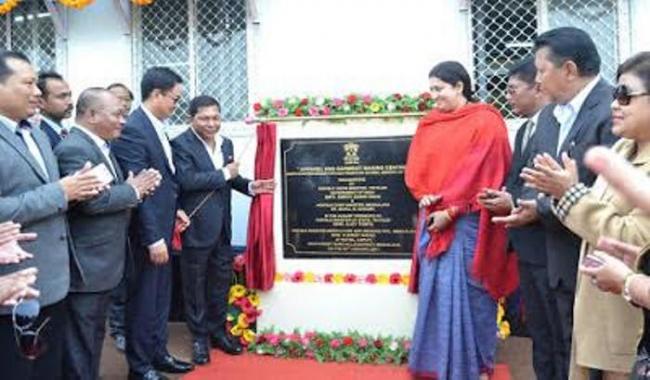 Meghalayaâ€™s first ever apparel and garment Centre inaugurated at Ampati

Dedicating the centre to the people of Ampati in particular and to the state as a whole, Smt. Irani said that the project was testimony to the true convergence of efforts of Central and State Governments.

She said that the Apparel Centre will create employment opportunities for both men and women of the region, thereby empowering them economically.

Irani informed that the Union Ministry of Textiles is implementing projects worth Rs. 70 crore in sericulture and weaving sectors for Meghalaya alone.

The Textiles Minister said that around Rs. 32 crore has already been sanctioned for the state of Meghalaya, for promotion of handlooms. 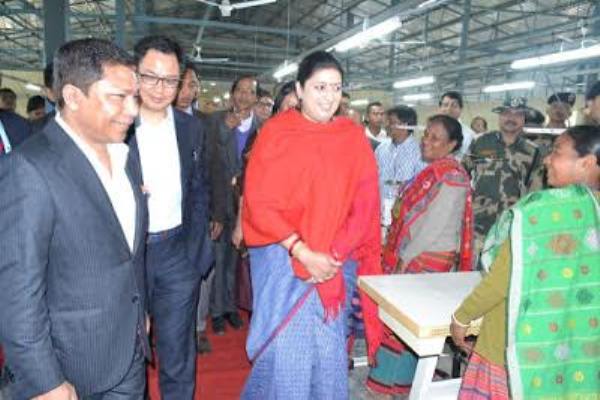 She appealed to the youngsters, particularly women, to leverage their handloom legacy and become enterprising entrepreneurs.

As the region is well-known for regional dyes, Smt. Irani urged upon the weavers of the state to register with India Handloom Brand, which she said can directly connect the weavers with big multinational companies.

The Union Minister said that once the centre starts functioning to its full potential, it will give an indication to investors across the country that the youth of the region are ready for economic engagement and expansion.

The sprawling Apparel and Garment Making Centre, covering an area of 45,000 sq. ft, has been set up at Hatisil near Ampati, at a cost of approximately Rs. 14.26 crore, under the North East Region Textiles Promotion Scheme (NERTPS) of the Ministry of Textiles.

The centre has three units, two of them housing 105 sewing machines each, and the third one having seventy machines.

The foundation stone for this centre was laid in 2015 by the Chief Minister of Meghalaya, in the presence of the then Union Textiles Minister. Its construction was completed by NBCC, in a record time of less than two years.

Speaking on the occasion, Chief Minister Dr. Mukul Sangma expressed his gratitude to the people of the region, for creating a conducive atmosphere and enabling completion of the huge infrastructure before timeline, without cost overruns.

He expressed confidence that the garment centre at Hatisil would grow to become the most sought-after export unit in the state.

He spoke of the advantage provided by the availability of international market in neighbouring Bangladesh, and the opportunity it offers in forging business partnerships with investors of Bangladesh.

Stating that the weavers of the region are a ready workforce and that they only require advanced training, he highlighted the importance of providing training for their technological up-gradation.

Union Minister of State for Home Affairs, Kiren Rijiju said that the Centre has given special focus to Meghalaya, particularly Garo Hills, in creating job-oriented programmes. He added that there could not be a better programme for women than this, for promotion of textiles and handlooms in the state.

Dwelling on the huge potential of the region, he said there was a need to create industries and employment opportunities to harness the potential of sectors such as like sericulture and weaving.