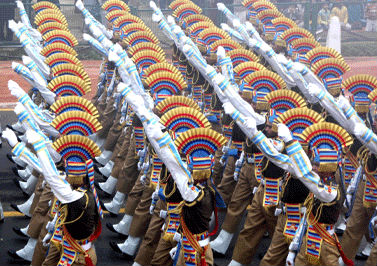 SSB Officers will celebrate Republic Day on border out posts

India Blooms News Service | | 25 Jan 2017, 05:38 pm
#SSB, #SSBOfficers, #RepublicDay
New Delhi, Jan 25 (IBNS): On the personnel initiative of DG, SSB Archana Ramasundaram, it is first time that the Officers of the rank of Dy. Commandant and above posted in various Sector Headquarters, Frontier Headquarters and Force Headquarter New Delhi are going to Border Out Posts (BOPs) in far-flung areas on Indo-Nepal & Indo-Bhutan Borders and to J&K and Naxal affected areas to celebrate 68th Republic Day with National fervor.

On this occasion the officers will also convey the message of DG, SSB to the force personnel and public present in the functions.

The DG also said that this occasion will help in establishing a healthy relationship with the border population.

This national festival shall be celebrated in a manner that better relationship could be ensured between border population and SSB to strengthen integrity and unity of the country, read the government statement.

The idea behind this initiative is also to establish  direct communication between the officers of headquarters and the jawans posted at remote locations on the borders.

This endeavor  will also ensure that senior officers appreciate the problems of jawans and instill confidence in them that the DG and the FHQ is sensitive towards their problems and making all out efforts to provide them better facilities.

On this occasion the DG, SSB has also called upon the force personnel to follow the motto of SSB “Service, Security & Brotherhood” and strive for security of the border population and keep the national flag flying high and achieve new heights.