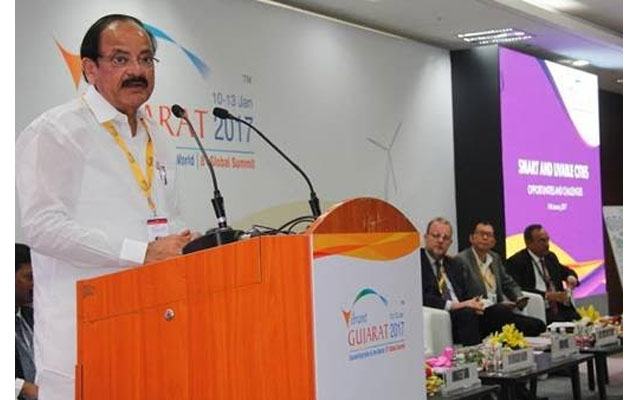 Venkaiah Naidu says urban renaissance is on in India

He was addressing a conference on Smart and Livable Cities at the Vibrant Gujarat Summit in Gandhinagar, Gujarat on Wednesday.

He said, even while government focuses on urban development, as about 65% of GDP comes from cities being engines of growth, it wants to benefit poor in the process.

In the initial stage government identified 100 cities. Developmental work in sixty of them, including in Ahmedabad and Surat is going on at a fast pace now.

He said Ahmedabad with an AA rating and Surat also with high ranking have already put Special Purpose Vehicles (SPV) in place for taking forward this work.

He said work is also expected to begin soon in four more cities in Gujarat including in Gandhinagar and Vadodara.

The minister said that work on the 1st phase of Metro rail project in Ahmedabad, which would be of about 32 kms, is in full swing with an investment of about 11 thousand crore rupees.

Naidu said his government in future would also like select 500 more cities with populations over one lakh people under smart city programme.

He said for such a programme to continue without any hindrances, the government had adopted the system of having the SPV system, for which an allocation of Rs 500 crores was made.

The idea is to provide people in every city with better facilities- including clean water, power and better traffic management among others.

Naidu said that the Prime Minister is not for freebies and he wants ‘peoplism’ - better life to people, instead of populism.

He said Gujarat model had been unique in this respect and all other states including Bihar, Madhya Pradesh, Chattisgarh, Andhra Pradesh and Telangana are adopting such developmental models now.

He said the focus is on Infrastructure development now with an aim to transform urban landscape with introduction of metro rail, BRTs and separate Cycling tracks etc.

He said Narendra Modi also intends to bring in a behavioural change among people and adopt a path of inclusive growth through various policies like Make in India, Digital India and Clean India, among others.

He pointed out that aspects like the propagation of ideas like beti bachao and the voluntary surrender of LPG gas cylinders by over one crore thirty lakh people are all bringing in a psychological transformation in our society.

Naidu referring to de-notification of Rs. 500 and Rs. 100 currency notes has said that it is like a bitter pill for tackling some ills of our society. He described this measure as a radical transformative measure.

He said people have shown monumental resilience in the face of this challenge taken up by the Prime Minister against the black money.

The minister expects this measure to lead to identification of those who deposited the black money leading to increased tax base.

Naidu said that the Prime Minister is preparing people for a massive transformation.

The announcements by Narendra Modi on interest rebates for housing loans and recent lowering of interest rates by banks are expected to lead to everyone owning a house by 2022.

Pointing out that most economies have a downtrend currently and India is said to be the only bright spot.

He said every rating agency including Moody’s is rating India very high now.

He invited Global investors to make more investments in Gujarat which is a powerhouse of economic growth and in other states of India.