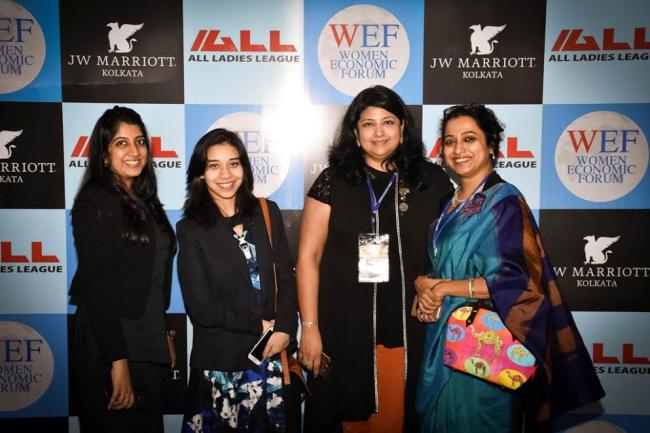 
In an effort to celebrate womanhood and empowerment, women from different walks of life gathered in Kolkata to take part in the WEF, which took place on Jan 2 and 3 at the newly opened JW Marriott Hotel which hosted the event.

The inaugural edition of WEF in 2017 was based on the theme “Shakti Unleashed: Awakening the Power Within".

Speaking exclusively to IBNS, Dr Harbeen Arora said, "The health of vibrancy of a nation now depends on unleashing the 'shakti' or potential of its women force."

"People have understood the importance of these forums for the purpose of women empowerment. Everybody across the world is talking about gender balance, because they have understood that when they support women, they are not just supporting women as a women issue, they are supporting societies, families, communities, businesses, economies and countries," she added.

The two-day event, which hosted around 400 dignitaries, had a speakers ranging from celluloid stars to vegetables vendors.

While Chandbanu Bibi, a biri worker representing NGO Help Us Help Them, spoke about her struggle to keep up with the world and changing times, educator and columnist Dr Jonaki Mukherjee shared her experience on overcoming grief.

Asked about the best part of WEF, Mukherjee said, "Usually women have this notorious tag that 'a woman is never another woman's friend' and WEF is breaking that myth. I think it's high time women broke away from this mould."

Hailing the sessions, Surabhi Agarwal of Tavolozza, an art brand which helps women artists promote their work, said, "My take from the sessions is that you get so much in terms of connectivity. You get to meet so many people from different walks of life, learn from their mistakes, their success, their stories. You get to incorporate so much more in your own life."

Suhasini Chakraborty, daughter of actor Arjun Chakroborty and jewellery designer Nilanjana Chakraborty, who spoke about impact that celebrities can make in the society, rued the lack of transparency in advertisements and slammed the media for misguiding people with misleading adverts.

"My basic point was how today's generation is suffering from various complexes, thanks to what media has done to portray beauty in a flawless fashion, which is actually not the reality."

She also spoke about how movies have the ability to shape a society and how women have played the trophy wife for decades.