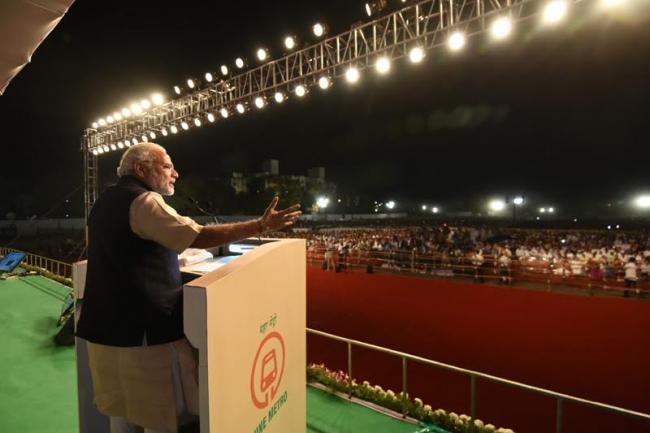 Addressing a large gathering in the city on the occasion, the Prime Minister said India is urbanising at a very quick pace and therefore, it is essential to work in two directions: improving quality of life in villages; and thinking long term so that we can mitigate the challenges our urban areas are facing.

Asserting that we must plan for the future, the Prime Minister said that everything cannot be seen from a political point of view.

He added that we must plan adequately for growth of our cities.

The Prime Minister said that the Union Government is actively working on the Rurban Mission, which caters to those places that are growing and urbanising quickly.

The Prime Minister said that the gains of the present are vital but we need systems that cater to the needs and aspirations of the future too.

He said that it is the Government’s endeavour that whatever projects are taken up are completed within the scheduled timeframe.

He stated that in this nation everybody is equal before the law and everyone has to follow the law.{Image_1}

He added that if the evils of corruption and black money were removed earlier, he would not have had to take the decisions that he took.

Noting that Pune is a city of learning, he exhorted the city to take the lead in embracing online banking and exploring the facilities available.{Image_2}

In this nation, the voice of 125 crore Indians will be heard; this voice cannot be subverted by a select few, the Prime Minister said.