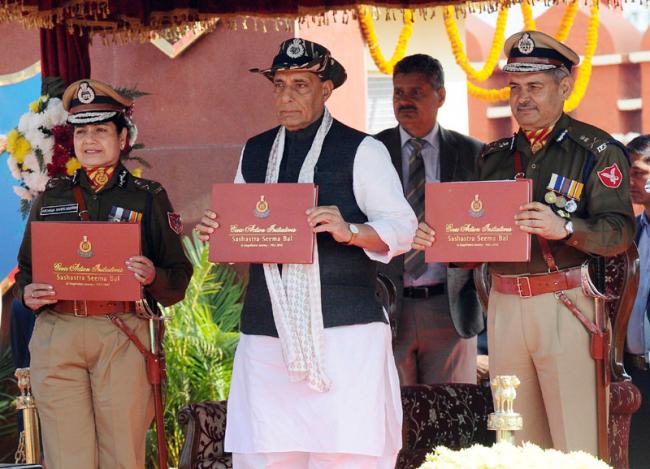 Rajnath Singh addresses at the 53rd Raising Day of SSB

Rajnath Singh also felicitated the awardees of President Police Medal and Indian Police Medal. Later it was followed by a colourful display of SSB troops, Dog Squad, motorcycle riders and tabluex of Operational Directorate, Training and Sports Directorate of SSB.

He appreciated the work of SSB Battallions deployed in J&K and said they are doing commendable job in performing their law & order duties.

He said that the operational achievements of SSB are as per our expectations, even without having a dedicated intelligence unit.

Rajnath Singh said that SSB must have such unit and he will ensure that they will get a dedicated Intelligence unit shortly.

Addressing on the occasion, Rajnath Singh said that he pays tributes to those courageous soldiers who made supreme sacrifice for protecting the boundaries of nation and the lives of our citizens.

He said that SSB is fulfilling the responsibility of protecting the 2450 kms boundary with Nepal and Bhutan.

He said that the boundary with Nepal and Bhutan is different because of the open borders and no restrictions on movement of people.

This is the reason it becomes difficult to recognise anti-social elements, he said.

Singh said that SSB has been successful in curbing these anti-social elements.

On this occasion,  Singh, Union Home Minister released a Coffee Table Book titled “Civic Action Initiatives” of SSB covering the work done by SSB for the benefit of people since its inception.

He also released SSB video theme song on this occasion.

He appreciated that the installation of FM Channels in border areas with All India Radio by SSB is a unique initiative to connect with the masses and to counter the anti-India propaganda.

He also appreciated the discipline, dedication and synchronization shown by the SSB Jawans and woman personnel in their parade and dare devil acts during the function.

Archana Ramasundaram, Director General SSB in her welcome speech highlighted the achievements and initiatives taken by the SSB in border management.