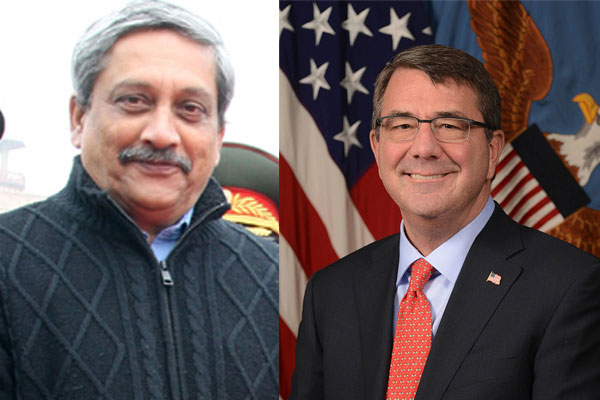 India Blooms News Service | | 30 Aug 2016, 12:02 pm
#LEMOA, #India-US logistics deal, #Manohar Parrikar, #Ashton Carter
Washington, Aug 30 (IBNS) : In a landmark move in bilateral move toward building defence ties, the United States and India have signed a logistics agreement+ for the use of each other's land, air and naval bases for repair and resupply.

The Times of India reported that the deal was signed on Monday seeking to counter the growing maritime assertiveness of China.


Welcoming the signing of the bilateral 'Logistics Exchange Memorandum of Agreement' (LEMOA), Defence Minister  Manohar Parrikar and US Defence Secretary  Ashton Carter said the pact will facilitate opportunities for "practical engagement and exchange".

According to TOI, LEMOA facilitates the provision of logistical support+ , supplies, and services between the US and Indian militaries on a reimbursable basis, and provides a framework to govern them.


"They agreed on the importance (that) this framework will provide to facilitate innovative and advanced opportunities in defence technology and trade cooperation. To this end, the US has agreed to elevate defence trade and technology sharing with India to a level commensurate with its closest allies and partners," the report quoted a joint statement as saying.

According to the statement, the defence ties between the two countries is based on their "shared values and interests," and their "abiding commitment to global peace and security."


During their meeting, Parrikar and Carter discussed the "wealth of progress" in bilateral cooperation and deepening strategic partnership between the United States and India.

TOI said the  US has agreed to elevate defence trade and technology sharing with India to a level commensurate with its closest allies and partners.