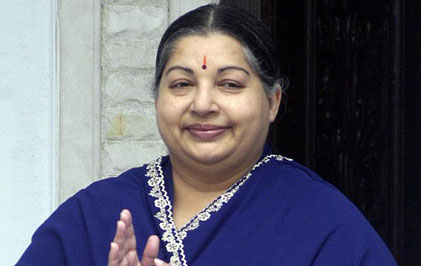 Jayalalithaa heads for a massive victory in TN by-election

India Blooms News Service | | 30 Jun 2015, 12:39 pm
#Tamil Nadu Chief Minister, # J Jayalalithaa, # election, # Tamil Nadu
Chennai, June 30 (IBNS) Tamil Nadu Chief Minister J Jayalalithaa, who eyes to come back to the state assembly after overcoming a court conviction in disproportionate assets case, is heading for a massive win in Tamil Nadu's RK Nagar assembly by-elections maintaining a lead of more than one lakh votes.
The election is crucial for Jayalalithaa who overcame a conviction verdict in disproportionate asset case and returned as the state's Chief Minister.
.
, reports said.The AIADMK leader is  far ahead of her nearest rival -- CPI's C Mahendran -- with a margin of 1,02,450 votes at the end of the ninth round of counting

She returned to the top post on May 23 after being acquitted in a disproportionate assets case by the Karnataka high court. She had been convicted in the case in September last by a trial court in Bengaluru.

She has to fulfil the constitutional requirement of getting elected as MLA within six months of becoming the chief minister.
Related Images