The just concluded 15th anniversary of the East Asia Summit (EAS), a premier forum in the Asia-Pacific region dealing with issues relating to security and defence and shaping a significant role in the strategic, geopolitical and economic evolution of East Asia, was held in the backdrop of geo-political turmoil caused by China’s extraordinary assertiveness on territorial claims, and a deadly virus wreaking havoc all over the region.

It necessitated virtual, rather than face-to-face interactions, and informal discussions resulting in better appreciation of the actual views of the leaders, the hallmark of ASEAN process.

Despite this shortcoming, the need for countries across the Indo-Pacific to cooperate in tackling the coronavirus pandemic and the current economic crisis was pushed with great determination by Vietnam, this year’s Chair of ASEAN and other leaders in the virtual summit.

The virtual meeting chaired by Vietnam's Prime Minister Nguyen Xuan Phuc also saw several leaders highlight the need to work together to ensure peace and stability as they rebuild their economies, demonstrating Hanoi’s leadership and diplomatic acumen in synergising disparate views, while underlining the critical issues that lie at the heart of the recent crisis in the region.

Hanoi meticulously prepared the agenda, tied every knot and saw to it that all substantive issues get mentioned in the final declaration, even though some statements have to be read between the lines.

The Hanoi Declaration (HD), outcome of the Summit, called for “partnership with the other participating countries, in which we strive to promote strategic trust and ensure transparent, predictable and responsible behaviour”.

It stressed on the need to further enable the EAS as an effective platform to deal “with existing and emerging transnational and transboundary challenges as well as strengthening multilateralism; strong commitment to multilateralism founded on the principles of the Charter of the United Nations and based on international law, which are the indispensable foundation of a more peaceful and prosperous world.”

That spoke volumes on what needed to be said under the constraints ASEAN face in the current geo-political fix and uncertainty. The adherence to UN Charter and international law was clearly enunciated as part of an effort to maintain peace, stability and territorial integrity of the countries of the region, sending a signal that those who do not follow them are guilty of violation of established norms of a rule-based regional order.

The HD also adopted four statements on marine sustainability; epidemics prevention and response; women, peace and security; and steady growth of regional economy. Particularly important is the resolve of the leaders of EAS to fight the deadly virus through cooperative means and use of technology to effectively deal with the issue.

Vietnam’s own stellar record in limiting the spread of virus and the attendant damage by adopting innovative technological solutions for contact tracing and improving testing, made it a perfect advocate of sharing among countries of the grouping.

One of the major successes of the Summit from the ASEAN perspective is the signing of the Regional Comprehensive Economic Partnership (RCEP) that will spur business confidence and recovery through enhanced market access, comprehensive trade facilitative measures and expanded commitments in areas like e-commerce and intellectual property rights.

The agreement will progressively lower tariffs across many areas in the coming years. Fifteen Asia-Pacific nations, including China, signed the world’s biggest trade agreement, the RCEP, with hopes that it will help recover from the shocks of the Covid-19 pandemic.

India pulled out of talks last year, concerned that the elimination of tariffs would open its markets to a flood of imports that could harm local producers. But other nations, including Vietnam, have said in the past that the door remains open for India’s participation in the RCEP, influenced by China. Singapore.

Had New Delhi joined RCEP, it would have make up nearly a third of the world’s population and accounted for 29 per cent of global gross domestic product. Other members of the grouping sincerely wants India to join to balance Beijing’s dominance in the economic grouping and has kept the door open for the purpose, offering New Delhi in the meantime an Observer status. 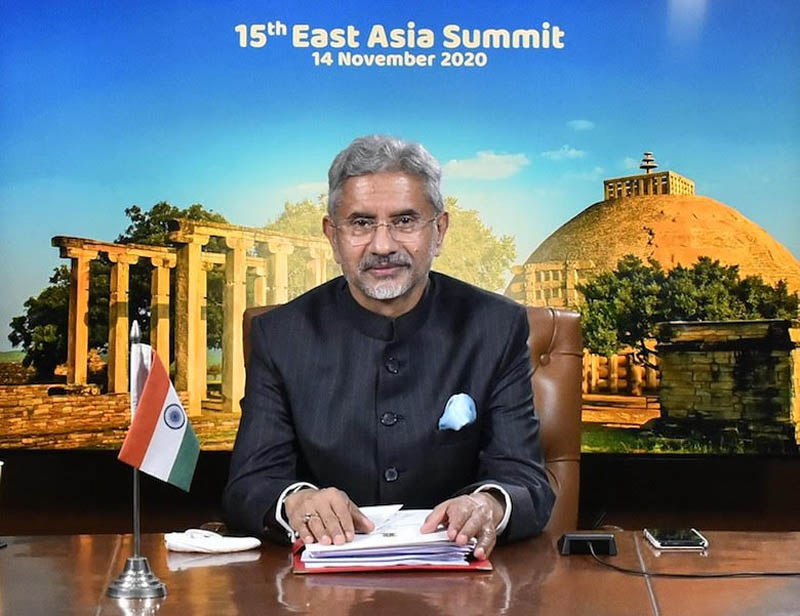 India’s Views on the Geo-political Turmoil in the Region

India was represented in the Leaders’ Summit by Dr. Jaishankar due to Prime Minister Modi’s preoccupation with more important domestic issues. As the summit was being held amidst China’s aggressive actions in Eastern Ladakh and increasing expansionist behaviour in South China Sea and Indo-Pacific, naturally his focus was more on geo-political turmoil in the region.

While re-affirming the importance of the EAS as the leaders-led forum to exchange views on strategic issues, he spoke of the “importance of adhering to international law, respecting territorial integrity and sovereignty, and promoting a rules-based global order and the need for respecting territorial integrity and sovereignty,” including through upholding adherence to international law, especially the UNCLOS (United Nations Convention on the Law of the Sea). 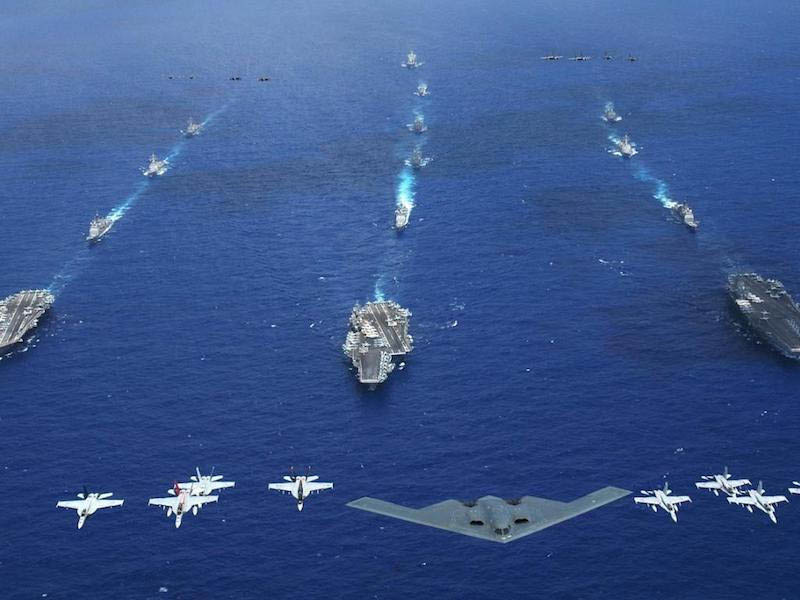 On the South China Sea, the External Affairs Minister expressed concern about “actions and incidents that erode trust in the region,” an oblique reference to China. Even while expressing its consistent position on freedom of navigation and its emphasis on rule-based order and UNLOS as the basis of resolving disputes, India, for the first time raised its voice quite strongly about South China Sea and a prospective Code of Conduct (CoC) in an official event like EAS, called for ASEAN unity, and expressed its solidarity in creating a binding CoC, in compliance with international law, particularly the UNCLOS.

New Delhi stressed on the Code of Conduct negotiations not to be prejudicial to legitimate interests of third parties and should be fully consistent with UNCLOS.

On the Indo-Pacific, Jaishankar noted the growing interest in the Indo-Pacific, in view of many stakeholders' recent articulation of the idea, as an integrated and organic maritime space, with ASEAN at its centre. He appreciated the synergy between the ASEAN Outlook and India’s Indo-Pacific Oceans Initiative.

Prospect of India and ASEAN Growing as a significant Force

Apart from articulating its view on the emergent issues like security and pandemic at the EAS, India and the of ASEAN adopted in September this year the plan of action for 2021-25 that envisages greater cooperation in areas ranging from trade to maritime security and counter-terrorism.

To work towards the ASEAN 2025 vision for an economically integrated and rules-based grouping that narrows the development gap and enhances connectivity.

To further this aim, India and the ASEAN will work closely to promote physical connectivity by “completing the missing links between South and Southeast Asia, including, but not limited to, expediting the completion of relevant sections of the India-Myanmar-Thailand trilateral highway and supporting steps to build an economic corridor along it and its extension to Cambodia, Lao PDR, and Vietnam”.

When implemented, India and ASEAN, together with others, will surely emerge as a leading force shaping the destiny of Indo-Pacific as a coherent and organic maritime space securing peace and prosperity for all nations in the region.


(Formerly with JNU, the writer is India’s foremost expert on SE Asia)