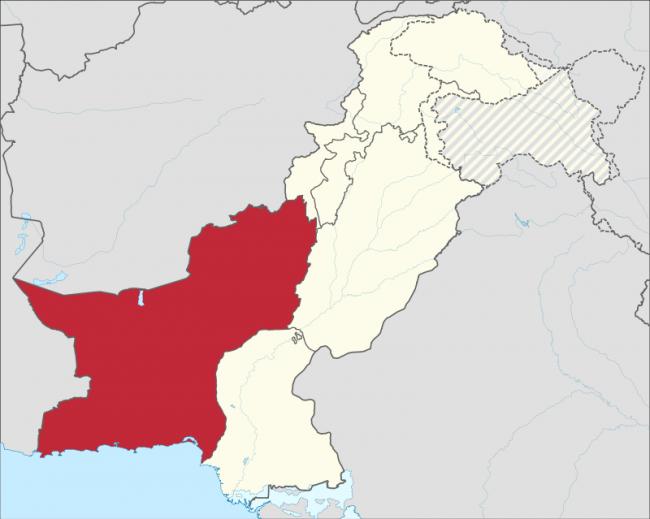 Five bullet-riddled bodies of ethnic Punjabis were recovered by Levies Force personnel in the Tajaban area of Turbat tehsil (revenue unit) in the Kech District of Balochistan on November 18, 2017. The Levies Force disclosed that all the victims had received multiple bullet injuries and belonged to the Gujrat District of Punjab.

Three days earlier, 15 bullet-riddled bodies were recovered by Levies Force personnel in the Buleda area of Turbat tehsil in the Kech District on November 15, 2017. Makran District Commissioner Bashir Ahmed Bangulzai said that all the victims apparently belonged to various districts of Punjab, and were allegedly en route to Iran through an infrequent route illegally. Each of them received multiple bullets wounds from a close range. According to District Commissioner Kech Darmon Bhawani, "Armed men had kidnapped these men near the Iranian border and shot them near Goruk." Balochistan Liberation Front (BLF) had taken responsibility for the attack. An alleged BLF commander, Younas Taukali, involved in the incident was later killed on November 17, 2017, during a Security Forces (SFs) operation. Inter-Services Public Relation (ISPR) claimed that BLF leader Taukali was killed by the Frontier Constabulary (FC) near Alandur, Abdur Rehman village in Kech District.

2017 also witnessed several other major incidents (each involving three or more fatalities) where non-ethnic Baloch people were targeted. Prominent among these were:

August 20: Three Punjabi labourers, who were abducted by unidentified militants four days earlier, were found dead in the Hoshab area of Kech District in Balochistan. These labourers, who belonged to the Rahim Yar Khan District of Punjab, were working on a development project in the area. The bodies were found with multiple bullet injuries. No group claimed responsibility for the attack.

May 19: Unidentified militants shot dead three labourers and injured another in Hoshab town, Turbat District. The slain labourers were part of a team working in the coastal Makran Division on a major highway linking the port-city of Gwadar to the provincial capital of Quetta. No group claimed responsibility for the attack.

May 13: At least 10 labourers were killed and two were injured when unidentified motorcycle-borne assailants opened fire at a construction site in the Pishgan area of Gwadar. Senior Levies Official Muhammad Zareef stated, "All the labourers were shot at close range." The slain labourers belonged to the Naushahro Feroze District of Sindh. Balochistan Liberation Army (BLA) had claimed responsibility of the attack.

According to partial data compiled by the South Asia Terrorism Portal (SATP), a total of 198 settlers have been killed in Balochistan since the killing of Nawab Akbar Bugti , leader of the Bugti tribe and President of the Jamhoori Watan Party (JWP), on August 26, 2006. Bugti was killed in a military operation in the Chalgri area of the Bhamboor Hills in Dera Bugti District. Out of the 198 'outsiders' killed, at least 75 were Punjabis. 23 Punjabi settlers have already been killed in the current year (data till November 26, 2017). 2016 witnessed no attack on Punjabis, while the number of such fatalities stood at a total of six in 2015; 17 in 2014; 29 in 2013; 26 in 2012; 13 in 2011; 21 in 2010; 18 in 2009; and one in 2008. No such fatalities were recorded in 2007 and 2006. While Punjabis have been the main targets, other ethnic groups, like Urdu-speaking people from Karachi and Hindko-speaking settlers from Haripur District in Khyber Pakhtunkhwa (KP), have also been singled out in acts of ethnic violence.

A series of attacks on Punjabi and other non-Baloch settlers in Balochistan, as well as the destruction of national infrastructure have followed the killing of Akbar Bugti. These killings have been orchestrated by Baloch militant organizations such as the BLA, BLF and the Baloch Republican Army (BRA), among others, who began to voice anti-Punjabi sentiments in their slogans in the wake of the military action against Bugti. A media report published on June 28, 2011, had noted, "Almost all non-Baloch are on their hit-list." Muhammad Khalid of Balochistan-Punjabi Ittehad stated, "The militants began to target the Punjabi settlers after Nawab Bugti was taken out by the military (in August, 2006). Before that there were occasional incidents in which Punjabis were targeted."

Significantly, most of the Punjabi settler killings are recorded in South Balochistan (principally in Bolan, Kech, Gwadar, Panjgur, Khuzdar, Sibi and Lasbela Districts) which accounts for 156 killings; followed by 27 in North Balochistan (mostly in Nushki, Quetta and Mustang District). The overwhelming concentration of such killings in the South is because of the presence and dominance of Baloch insurgent groups in this region, while the North is dominated by Islamist extremist formations such as the Tehreek-e-Taliban Pakistan (TTP) and Lashkar-e-Jhangvi (LeJ), who are primarily engaged in sectarian killings within Pakistan. The latter groups of Islamist terrorist formations enjoy the tacit support of Islamabad, which has, for long, used Islamist extremist violence as an instrument of domestic political management. These groups are engaged in a selective campaign against the Baloch people, and have sought to aggressively backed efforts to alter the region's demography.

The targeted killings of non-Baloch persons can also be attributed to the rampant extra judicial killings and forced disappearances by the Pakistani SFs in the region. According to the SATP database, the Province has recorded at least 6,726 fatalities since 2004, which includes 4,000 civilians, 1,486 militants and 1,240 SF personnel. The maximum number of fatalities in the 'civilian' category was the result of extra-judicial killings by SFs in retaliation to target killings of SF personnel by ethnic Baloch insurgents. Of the 4,000 civilian fatalities recorded in Balochistan since 2004 [data till November 26, 2017], at least 1,152 have been attributable to one or other terrorist/insurgent outfit. Of these, 395 civilian killings (225 in the South and 170 in the North) have been claimed by Baloch separatist formations, while Islamist and sectarian extremist formations - primarily LeJ, TTP and Ahrar-ul-Hind (Liberators of India) - claimed responsibility for another 757 civilian killings, 674 in the North (mostly in and around Quetta) and 83 in the South. The remaining 2,848 civilian fatalities - 1,693 in the South and 1,155 in the North - remain 'unattributed'. A large proportion of the 'unattributed' fatalities, particularly in the Southern region, are believed to be the result of enforced disappearances carried out by state agencies, or by their proxies, prominently including the Tehreek-e-Nafaz-e-Aman Balochistan (TNAB, Movement for the Restoration of Peace, Balochistan). The large number of unattributed civilian fatalities strengthens the widespread conviction that the Security Agencies are busy with "kill and dump" operations against local Baloch dissidents, a reality that Pakistan's Supreme Court has clearly recognized.

According to the Federal Ministry of Human Rights, at least 936 dead bodies of 'disappeared' persons, often mutilated and bearing the signs of torture, have been found in Balochistan since 2011. Figures obtained from the Federal Ministry of Human Rights by the BBC Urdu on December 30, 2016, pointed to large-scale extrajudicial killings by state agencies and their proxies. Most of the bodies were dumped in Quetta, Qalat, Khuzdar and Makran areas, where the separatist insurgency has its roots. None of the mainstream media reported such state sponsored atrocities, as media reporting from these areas is strictly forbidden. The International Voice for Baloch Missing Persons (IVBMP) claims it has recorded 1,200 cases of dumped bodies, and there are many more it has not been able to document.

According to IVBMP, Pakistani Forces (military, Frontier Corps, intelligence and Paramilitary) have abducted 480, killed 26 persons including women and children, and torched at least 500 properties in more than 100 offensives just between March 1 and March 31, 2017. Only 30 persons among those abducted have been released thus far. None of the abducted persons have been presented to any court or given the right to defend themselves. Balochistan's Dasht, Tump, Mand, Dera Bugti, Kohlu, Quetta, and Makran regions have been the most affected areas, where Pakistani military carried out attacks and offensives against Baloch civilians. Recently on July 8, 2017, three civilians were killed and 265 were abducted by the Army from Dera Bugti and Mastung. The Army also reportedly 'stole' civilian property and valuables, including 300 camels.

While the SFs are engaged in a systematic campaign of extermination of the ethnic Baloch people through enforced disappearances and extrajudicial killings, Baloch militants, in turn, frequently target non-Baloch people, particularly Punjabis, in acts of revenge, and as a measure to block the state-backed project of the demographic re-engineering of the Province. This cycle of the systematic genocide of Baloch people and retaliatory targeted killings is unlikely to end in the foreseeable future.