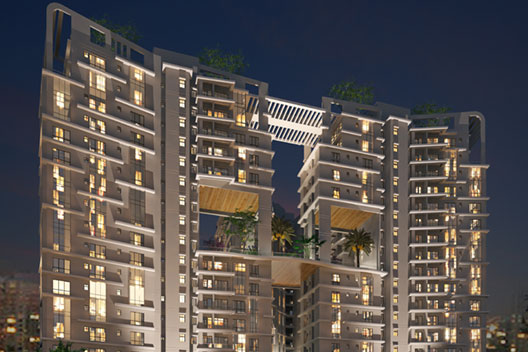 India Blooms News Service | | 26 Mar 2015, 09:01 pm
#Real estate defines lifestyle and economy of West Bengal
Kolkata, Mar 26 (IBNS): Kolkata, the city of joy, is known for its rich heritage, intellect, valued traditions, strong and community living. In the past few years, the city and towns of Kolkata have seen an unprecedented boom in the realty segment.

The state of West Bengal especially the metropolitan city of Kolkata is fast becoming a hub of residential and commercial complexes, high rises and malls. Experts say that the realty sector is one of the fastest growing segments in this Indian state.In recent times West Bengal has shown huge potential in terms of infrastructural and realty growth.

The growth of residential real estate is an indicator to the growing capability of the population residing in the Bengal region. Both affordable and luxurious housing segments in Kolkata are showing a stable growth. The boom of IT industry in Sector-V of Salt Lake has resulted in substantial absorption of a large pool of qualified engineers in private firms.

More than 500 IT companies are operating from in and around Kolkata and offering employment to thousands.

A positive attitude from the state government towards the real-estate segment has given the developers more opportunities to invest in the state and city has led to higher growth in the segment. There will be more and more residential and commercial complexes coming up in Kolkata, especially the old north region of the city, in coming five years.

The townships, however, are expected to see the most significant changes in realty development. The major drivers of realty development in Kolkata have been rising income levels, nuclear families and urbanization.

Due to slow industrial growth and lack of employment opportunities in Kolkata and West Bengal, the commercial real estate is facing a slowdown, even though the residential sector still remains unaffected.

A lot of official spaces remain vacant with no buyers for the space. There is a low demand for commercial space in Kolkata. This has led realty developers to focus more on building residential properties.

Kolkata real estate is the least volatile of all the contemporary markets in India. It is neither predominantly driven by investors nor by end users. There is a lot more value in pricing than some of the similar sized markets in India.

The gap between demand and supply is low compared to most of the bigger market. Kolkata sells about 1200 to 1300 units a month, which includes all segments of buyers and sellers.

LIG segment has had a bull run in the past 12 months, MIG segment has also been pretty much on track with a miniscule fall in demand, and the HIG segment has seen a slowdown of about 35%. In terms of sales some pockets have done exceedingly well and have come up as new areas like Mahishbathan, By-pass extension at the south and BT Road.

Market dynamics is heavily tilted towards End Users and there is a sharp decline of investors. Overall, Kolkata contributes at 2% of the national absorption, behaves more like a tier 2 city. Delhi NCR 40%, Mumbai/Navi Mumbai 30%, Pune 11%, Bangalore 9%, Ahmedabad 3%, Kolkata 2%. Private developers have allured such buyers, to invest in larger modern projects with gated community & world class facilities in Kolkata and surrounding areas.

Rajarhat, New Town, southern extension of the EM Bypass, Garia and Behala and other parts of North Kolkata have become the most preferred residential areas due to better and modern infrastructure and the extension of the Metro railway.

Owning an apartment in a modern housing complex has become both a necessity and an aspiration for the urban youth today thus creating great demand for quality housing.

Within the larger geography of North Kolkata, Kankurgachi area has emerged as the luxury catchment with an excellent social infrastructure, proximity to the CBD, lifestyle Shopping malls and excellent health care centres. Most luxury and premium projects are coming up in and around Kankurgachi, Phoolbagan and pockets off EM Bypass.

Sensing the consumer preferences & aspirations we launched a world class and luxurious project 'Astitva’ at Kankurgachi.  The project has been an innovation in terms of design and specifications.

A lot of impetus and steps towards a better environment were undertaken and it has been awarded and recognised as the first GOLD rated residential green building in eastern India by IGBC. Astitva has also bagged the award for being the Best Green Project at the CREDAI Awards 2015.

Inspite of Astitva being a green project, it is not devoid of facilities like swimming pool, Jacuzzi, spa, temple and a badminton and squash court.

The project is on the verge of completion and very soon it will be home to 115 happy families.