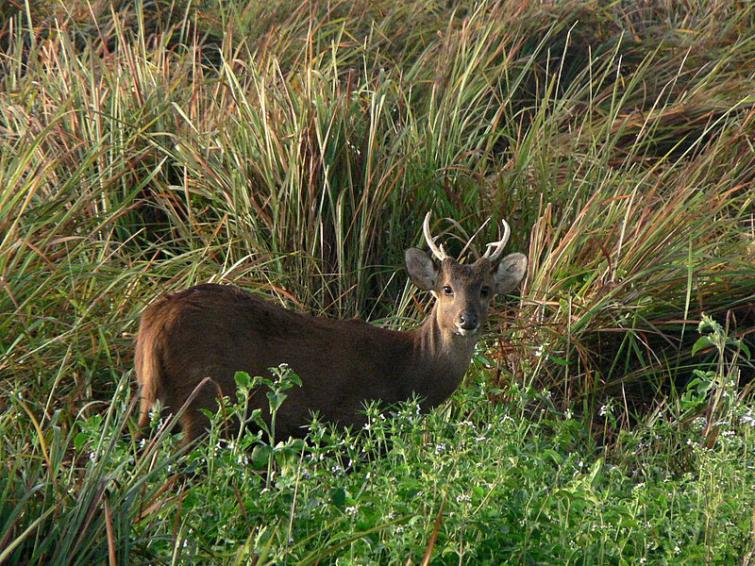 Hog deer fleeing from Kaziranga due to flood killed by hunters, two arrested

Guwahati/IBNS: As the flood submerged a large part of Kaziranga National Park, many animals, including one horned rhino, deer, elephant started fleeing from the park to seek safer places in the nearby areas and it is making easier for the hunters to locate and kill the wild animals for meat and body parts.

While the police and state forest department have engaged to provide security to the wild animals who came out from the national park due to flood, hunters are also trying to poach the animals.

Recently, police and forest officials arrested two persons who killed a deer as the wild animal came out from the national park due to flood.

According to the reports, based on intelligence input, police and forest officials conducted an operation at Behali area in Biswanath district and arrested two persons who killed a hog deer.

The police and forest department team arrested the persons while they were cooking the hog deer meat at a farm house located inside a tea garden at Dalani area.

The arrested persons were identified as Akomanlora Bora and Biswajit Baruah.

A police officer said the hunters killed the hog deer at Rangsali area under Behali police station and they were selling the meat of the deer at the area.

“Based on intelligence input we had launched operation at Dalani area and arrested two persons while they were cooking the meat of the deer at a farm house,” the police officer said.

According to the Kaziranga National Park authority, 35 wild animals including 30 hog deer have lost their lives due to current flood in the park.

The flood waters are gradually receding, but 65 percent areas in the park are still under water.