The Indian star tortoise is the most smuggled tortoise species in the world, with thousands trafficked annually smuggled out from India, Sri Lanka and Pakistan despite a 2019 total ban on the international trade in the species. While India continues to be the main country of origin for wild-caught star tortoises, Sri Lanka has in recent years become both a prominent source country and transit hub for trafficking networks that move the animals to East and Southeast Asia. Mongabay India writers Malaka Rodrigo and Pragati Prava report

In a secretly recorded video, a man is heard confidently saying, “I have 560 pieces of live tortoises of size 5-12 centimetres [2-5 inches] and the tortoises can be sent through India, Sri Lanka and Malaysia as I know helpful people at these airports.”

This took place inside an opulent shopping mall in Bangkok, Thailand’s capital, where the supplier met a potential customer. “I also have a small [tortoise] farm in Colombo,” he adds. They discuss how to bring live tortoises into the country to sell as pets.

The supplier is Wasim Sheriff, alias Mona or Machli, a notorious wildlife trafficker based in India who had somehow managed to evade the authorities for years. But his luck ran out on this occasion as the buyer recording the encounter turned out to be an informant trying to track the illegal tortoise smuggling route. Based on the information, Machli was arrested in October 2017 in India with 1,012 tortoises.


This investigation was part of a covert operation code-named Operation Dragon and carried out from 2016 to 2019, by the Wildlife Justice Commission (WJC), an NGO based in the Netherlands. The goal of Operation Dragon was to uncover the illegal tortoise and turtle trade in Southeast Asia. It resulted in the identification of 200 potential persons of interest and revealed eight criminal networks operating across India, Pakistan, Bangladesh, Sri Lanka, Malaysia and Thailand.

The information unearthed by the WJC investigation and submitted to law enforcement authorities resulted in the arrest of several leading smugglers and about 30 others involved in the international racket. The underground nature of the trade means there’s also bribery of officials involved, according to Sarah Stoner, lead investigator of Operation Dragon. “Usually, the costs also include the money a supplier has to spend on ‘fixing’ the deal or bribing the authorities to help smuggle the tortoises,” she told Mongabay.

The investigation also confirmed that the Indian star tortoise (Geochelone elegans), a species native to India, Sri Lanka and Pakistan, is also the most trafficked tortoise species in the global illegal pet trade. Star tortoises are collected in the tens of thousands annually from India and smuggled into East and Southeast Asian countries such as Malaysia, Thailand and Hong Kong. The airport in the southern Indian city of Chennai has long been the smuggling hub for star tortoises, but as crackdowns have intensified, the smugglers have sought out alternative routes.

In December 2017, authorities seized 1,200 tortoises in the northwestern town of Kalpitiya, known for its illegal smuggling links with southern India. A separate raid in India in May 2018 resulted in the seizure of 1,438 star tortoises, reportedly about to be smuggled into Sri Lanka via sea, confirming that the island nation had become an important nexus in the tortoise smuggling network. 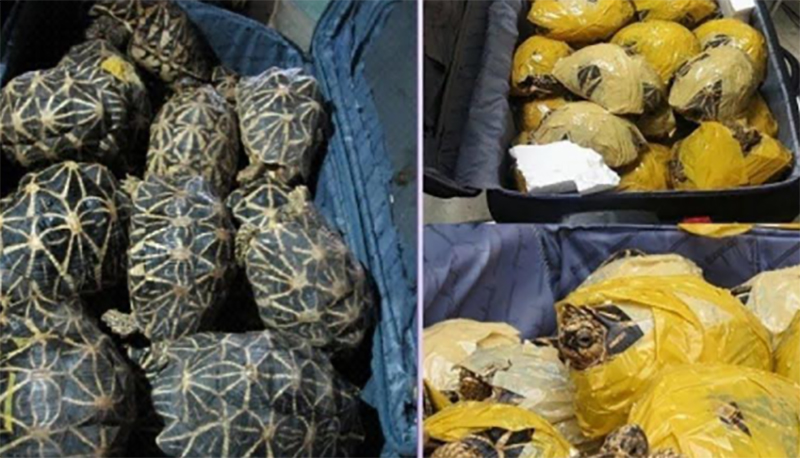 Sri Lankan customs officials have also made several seizures in recent years: 41 tortoises in 2016 and 304 in 2019 that were found in the possession of passengers. In 2015, customs seized 124 tortoises on 2 July and 488 on 28 July. In 2017, a raid led to the discovery of about 200 tortoises not native to Sri Lanka, a clear indication that the country had become a transit hub.

Machli, the Indian smuggler arrested in 2017, boasted of owning a tortoise farm in Colombo, Sri Lanka’s commercial capital, according to Sunil Sumanarathne, head of the Sri Lankan Department of Wildlife Conservation’s (DWC) “flying squad,” a rapid-response team. During raids, officials managed to discover star tortoises kept in different locations, but the numbers were low and almost all such cases appeared to be personal collections, Sumanarathne said. Often, it seemed that individuals had picked up stray star tortoises to raise as pets. In some cases, the teams discovered successful captive-breeding operations, but there was no evidence the tortoises were being bred for trading, Sumanarathne told Mongabay.

In the most recent case, in October 2021, police seized a haul of 223 live star tortoises at a site near Colombo’s international airport. They arrested two Indians and one Sri Lankan for the possession of wildlife and handed over the tortoises to the DWC.

“It would have been a golden opportunity for Sri Lanka to investigate the roots of star tortoise smuggling as several similar cases were reported in recent years,” said Samantha Gunasekara, former head of the customs office’s Biodiversity Protection Unit. Suspected smugglers who are arrested simply plead guilty and pay a fine, getting away with little or no follow-up by the authorities, Gunasekara said.

In India, authorities seized around 5,000 star tortoises between October 2021 and February 2022, according to Indian data. In Sri Lanka, where populations of the star tortoise are much smaller, there were total seizures of 5,487 tortoises over a much longer period, from 1997 to 2019, in nine different raids. But a closer look at the numbers shows a clear pattern: Nearly 60% of the seizures, some 3,130 star tortoises, took place between 2015 and 2017 alone.

While many of the confiscated star tortoises are those that have been smuggled out of India, trafficking of wild-caught star tortoises from Sri Lanka is increasing. Volumes are lower than in India, which means the collecting can go undetected more easily, and sometimes appears as personal collecting for domestic pets. But if all this information can be put together, Gunasekara said, authorities would be able to connect the dots and identify a clear pattern of trafficking.

The WJC investigation found Sri Lanka to be both a transit hub and a place of origin for sourcing star tortoises. Investigators say this reinforces the need for Sri Lanka to elevate efforts to curb wildlife trafficking, as there’s also evidence of other species being traded through the island’s ports, such as sea cucumbers. 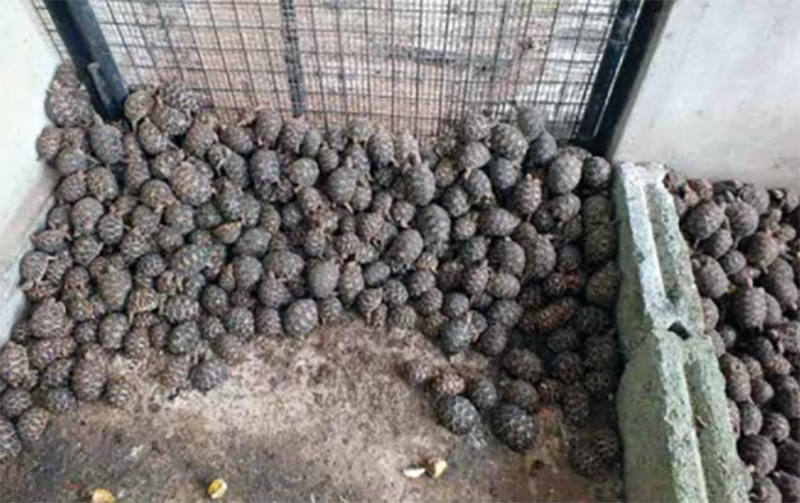 Part of a shipment of smuggled Indian star tortoises intercepted by the Sri Lankan Navy. Photo by Anslem de Silva.

Veteran Sri Lankan herpetologist Anslem de Silva, who has studied star tortoises for several decades, told Mongabay that early surveys conducted around 1995 identified many locations from where wild tortoises were being collected to be smuggled out of the country by local collectors.

While the Sri Lankan species is the same as that found on the Indian subcontinent, the design on its carapace is sharper and considered by collectors to be more beautiful than that of their Indian cousins, De Silva said. Traders specifically request “Sri Lankan star tortoises,” he added, and a study of online trading sites and social media posts advertising tortoises for sale tend to emphasise Sri Lanka as the origin.

A study by De Silva and Jordi Janssen for wildlife trade monitor TRAFFIC found star tortoises of Sri Lankan origin in international trade had been declared as wild-caught, an indication of smuggling. 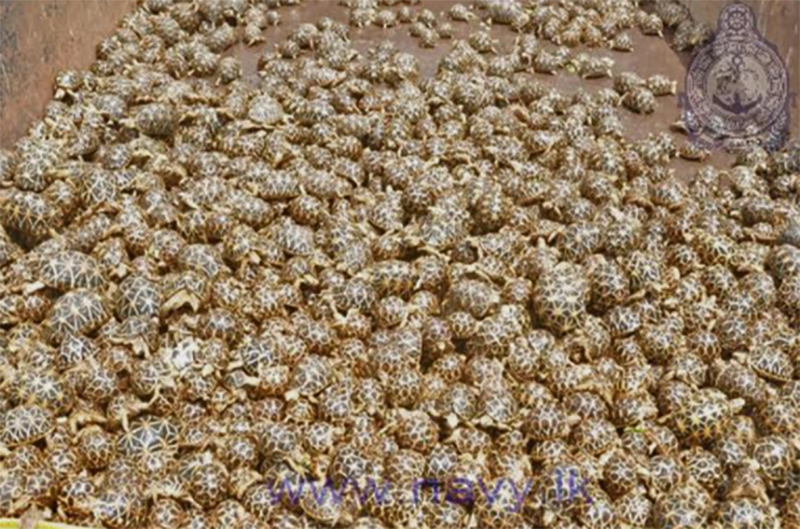 Most online ads and posts for star tortoises claim the animals have been bred in captivity. The trade database maintained by CITES, the international wildlife trade convention, shows that 248 star tortoises were exported for commercial purposes from Sri Lanka between 1978 and 1985, suggesting that a proportion of the animals being traded today are descended from those legally exported tortoises.

Saket Badola, the head of TRAFFIC’s India office, told Mongabay that the international trade in the star tortoise operates in a very organised manner. It starts with villagers or primary collectors, who gather the animals from the wild. They keep the tortoises with them until a higher-level collector picks them up and sells them to a middleman, who keeps them in places that could be described as safe houses. These are the points used by traffickers for collection, storage and distribution, where live animals are stored until trafficked, Badola said.

He adds that most of the tortoises seized from traffickers tend to be around the same size. “Had all of these seized reptiles been wild-caught, they would have been of different sizes, so it is also possible that some traders keep the wild-caught tortoises for breeding, but this is also illegal,” Badola said.

In Sri Lanka, seized tortoises are usually released back into one of the country’s dry-zone national parks. But by releasing star tortoises from India and Sri Lanka together in one place, there’s a risk that the unique characteristics of the Sri Lankan variety will be lost over time, De Silva said. In a 2020 study, De Silva and colleagues argue that it may already be too late to prevent this loss of “phylogeographic differentiation.” 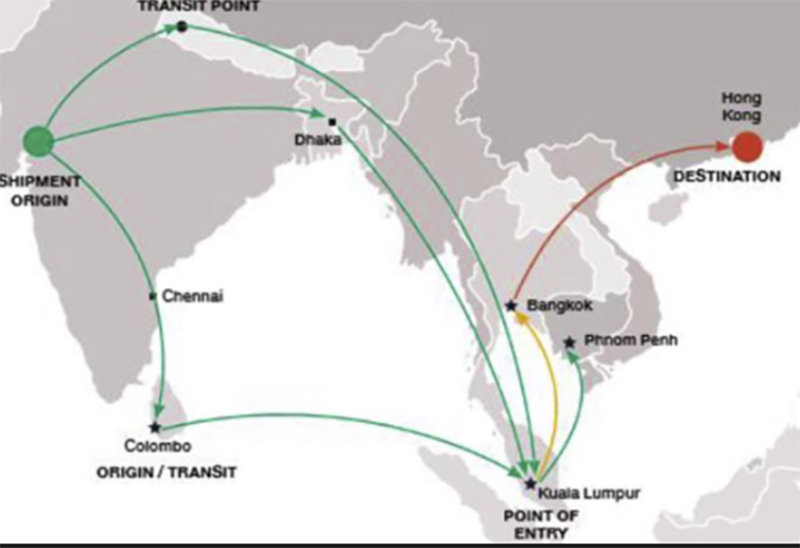 Star tortoises were first listed under CITES Appendix II in 1975 and elevated to Appendix I in 2019, through proposals championed by India and Sri Lanka, which means their international trade is banned.

While the Appendix I is a positive step, its effectiveness depends on how countries and others involved in the cross-border trafficking can work to strengthen their regulations and enforcement, said Chris Shepherd, executive director of the Monitor Conservation Research Society, which focuses on wildlife trade issues. “It is very important to have global collaboration to deal with this kind of transboundary illegal wildlife trade,” Shepherd told Mongabay.

As long as there’s still demand for Indian star tortoises, there will always be a black market driving poachers to take risks to collect the animals from the wild, he said. That means it’s also important to raise consumer awareness that species like Indian star tortoises are becoming threatened with extinction due to the demand. “Overall, the demand for reptiles by pet trade increases with endemic and charismatic creatures facing a much higher threat of being collected from the wild,” Shepherd said.

For a coordinated effort, law enforcement at the local level should also be sensitised to the seriousness of the wildlife trade issue, said Manori Gunawardena, a director with the Environmental Foundation Limited (EFL), a Sri Lankan NGO.