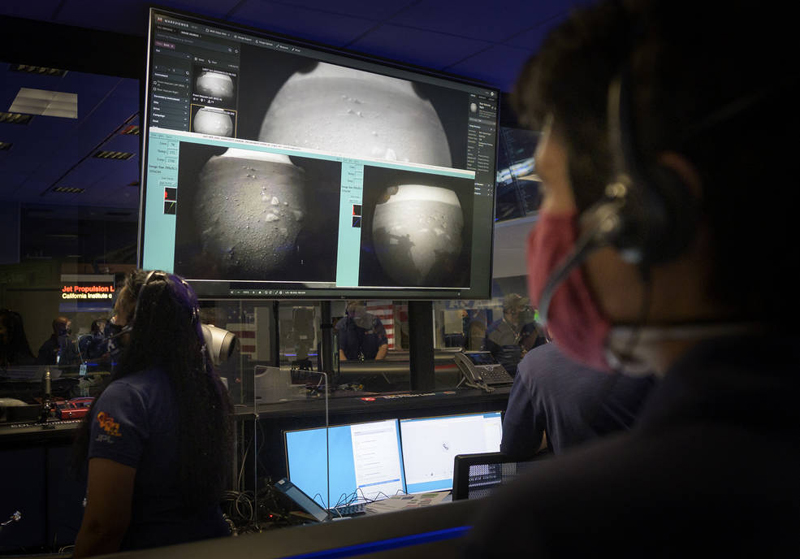 Washington/Sputnik: NASA's Perseverance Mars Rover landed on the Red Planet on Thursday, surviving a perilous 7-minute descent suspended by cables in the final minutes from a saucer-shaped spacecraft that slowed the plunge to walking speed before releasing the six-wheeled robot.

The touchdown, broadcast live on the internet by NASA TV, marked the beginning of a mission in which the rover will explore the dry-bed of an ancient lake and river delta for signs of microbial life that could have lived in a watery environment 3 million years ago.

Apart from its focus on Martian geology, the rover also includes devices to prepare for future exploration of the Red Planet, including a machine the size of a car battery that will attempt to make oxygen from Martian carbon dioxide, NASA said.

The rover also has a drill and other instruments to collect samples of Martian rocks and soil - and store them in sealed tubes for pickup by a future mission to ferry the debris back to Earth.

Strapped to the rover's underbelly, a tiny helicopter named Ingenuity will attempt to explore the nearby surface by navigating planet’s thin atmosphere.
The rover is also equipped to look for supplies of underground water, needed if humans eventually travel to the planet’s dry surface.

NASA said the descent began when the rover and its saucer shaped escort craft, enclosed in a cone-shaped capsule, hit the top of Mars atmosphere traveling at 12,500 miles per hour.

After four minutes, a parachute deployed to slow the descent to about 200 miles per hour, NASA said. The atmospheric entry vehicle then jettisoned the heat shield and dropped its cargo - allowing the saucer-shaped escort spacecraft to lower the rover on cables while slowing the descent to less than 2 mph for touchdown, it added.

NASA previously described the final seven minutes of the six-month journey from Earth as the most dangerous part of the mission, with no guarantee of Thursday’s success.

President Joe Biden reacted to the landing after watching it from the Oval Office.

"Congratulations to NASA and everyone whose hard work made Perseverance’s historic landing possible. Today proved once again that with the power of science and American ingenuity, nothing is beyond the realm of possibility," Biden said in a tweet.