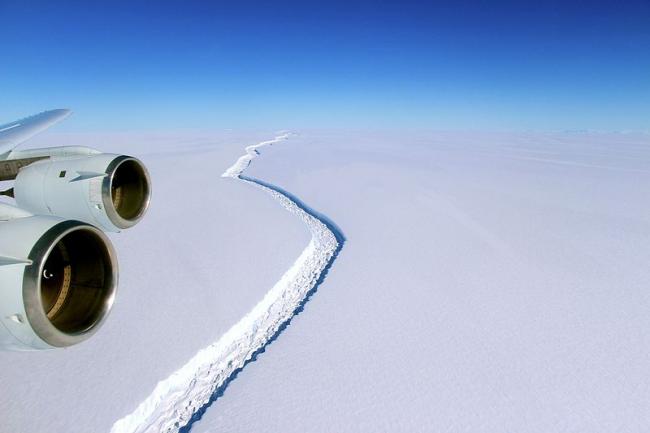 India Blooms News Service | | 06 Jan 2017, 07:46 pm
#Larsen C, #Larsen C Break, #Antarctica, #Swansea University
New York, Jan 6 (IBNS): An iceberg expected to be one of the 10 largest ever recorded is ready to break away from Antarctica, according to Swansea University scientists.

A long-running rift in the Larsen C ice shelf grew suddenly in December and now just 20km of ice is keeping the 5,000 sq km piece from floating away, read the Swansea University website.

Researchers based in Swansea University’s College of Science say the loss of a piece a quarter of the size of Wales will leave the whole shelf vulnerable to future break-up.

Larsen C is approximately 350m thick and floats on the seas at the edge of West Antarctica, holding back the flow of glaciers that feed into it.

Researchers have been tracking the rift in Larsen C for many years, following the collapse of the Larsen A ice shelf in 1995 and the sudden break-up of the Larsen B shelf in 2002

But in December the speed of the rift went into overdrive, growing by a further 18km in just a couple of weeks. What will become a massive iceberg now hangs on to the shelf by a thread just 20km long.

Project leader, Professor Adrian Luckman, was quoted as saying by Swansea University website: "If it doesn't go in the next few months, I'll be amazed.

"There hasn't been enough cloud-free Landsat images but we've managed to combine a pair of Esa Sentinel-1 radar images to notice this extension, and it's so close to calving that I think it's inevitable."

According to Professor Luckman, the area that will break off will be about 5,000 sq km, a size he said that would put the iceberg among the top ten biggest ever recorded.

Professor Luckman added that this is a geographical and not a climate event. Although it is believed that climate warming has brought forward the likely separation of the iceberg.

However, the researchers say they have no direct evidence to support this.

They are concerned, though, about how any break-off will impact the rest of the ice shelf, given that its neighbour, Larsen B, disintegrated spectacularly in 2002 following a similar large calving event.

"We are convinced, although others are not, that the remaining ice shelf will be less stable than the present one," said Professor Luckman.

"We would expect in the ensuing months to years further calving events, and maybe an eventual collapse - but it's a very hard thing to predict, and our models say it will be less stable; not that it will immediately collapse or anything like that."

The resulting iceberg from the shelf will not raise sea levels, but if the shelf breaks up even more, it could result in glaciers that flow off the land behind it to speed up their passage towards the ocean.

This non-floating ice would have an impact on sea levels.

According to estimates, if all the ice that the Larsen C shelf currently holds back entered the sea, global waters would rise by 10cm.

"The eventual consequences might be the ice shelf collapsing in years to decades," said Professor Luckman.

"Even the sea level contribution of this area is not on anybody's radar; it's just a big geographical event that will change the landscape there."