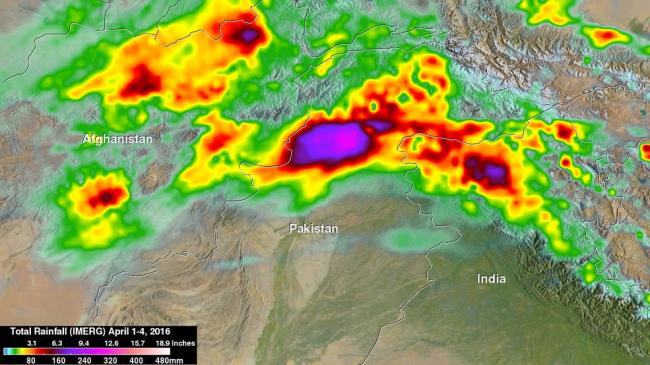 Heavy pre-monsoon rainfall moved through the area resulting in extensive damage in the Swat Valley northwest of Islamabad the capital of Pakistan, the NASA website said.

At NASA's Goddard Space Flight Center in Greenbelt, Maryland, IMERGE data were used to estimate the rainfall that occurred from April 1 to April 4, 2016. IMERG estimated that up to 308 mm (12.1 inches) had fallen in that region.


The Integrated Multi-satellitE Retrievals for GPM (IMERG) creates a merged precipitation product from the GPM constellation of satellites.

These satellites include DMSPs from the U.S. Department of Defense, GCOM-W from the Japan Aerospace Exploration Agency (JAXA), Megha-Tropiques from the Centre National D’etudies Spatiales (CNES) and Indian Space Research Organization (ISRO), NOAA series from the National Oceanic and Atmospheric Administration (NOAA), Suomi-NPP from NOAA-NASA, and MetOps from the European Organization for the Exploitation of Meteorological Satellites (EUMETSAT).

All of the instruments (radiometers) onboard the constellation partners are inter-calibrated with information from the GPM Core Observatory’s GPM Microwave Imager (GMI) and Dual-frequency Precipitation Radar (DPR).