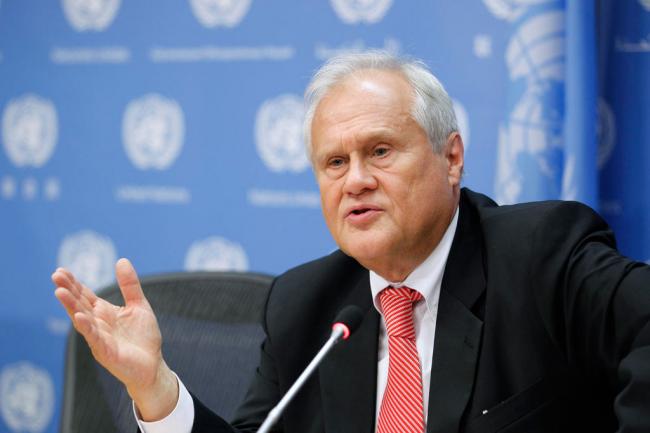 Sajdik, in a recent opinion piece for US News & World Report underscored that the unprecedented Ebola outbreak that has plagued West Africa for months, killing more than 9,000 people, derailing economies and rolling back years of solid development gains, might have been prevented if the world had done more earlier to help improve the region’s “dilapidated and underdeveloped” public health care systems.

“This pandemic was largely preventable had the international community prioritized Guinea, Sierra Leone and Liberia’s weak health systems, bolstered [their] under-resourced human capacity and infrastructure, and ensured that these West African countries’ emergence from conflict and instability were better managed,” he asserted.

Sajdik maintains that to prevent future pandemics, the emergency Ebola response in the affected countries must be linked to long-term efforts to strengthen national health systems.

While quarantines, beds and medical workers are essential in stemming the tide of the toll, “going forward,” the ECOSOC President said, “we must not focus solely on a reactionary response,” adding the importance of setting up resilient societies that are more immune to current and future pandemics.

When identifying solutions for a comprehensive and multi-sectoral response to the Ebola outbreak, he continued, the vital work of ECOSOC prioritizes prevention in an effort to identify solutions. “We need to address the root causes rather than just symptoms.”

He recalled that UN Secretary-General Ban Ki-moon has said that “mitigating the consequences of Ebola will demand a coordinated global response comparable to what is being provided to end the outbreak.”

In that regard, the African Union Centre for Disease Control and Prevention is commendable, and developed countries should generously support it to assist in reducing regional communicable diseases.

“We must provide the necessary technical assistance and capacity-building to make sure it is equipped with the latest technologies necessary to respond effectively on the Ebola outbreak and any pandemic in the future,” noted Sajdik.

At the same time, he said that while the international community’s accent on good governance is commendable in post-violence and post-conflict, it should also focus on adequate health care systems, clean water and sanitation, education and poverty alleviation to make the ground that spreads disease infertile.

“Now is the time to show that such pandemics can only be averted through long-term development investments,” the ECOSOC President stressed. “It should be our number one priority, from Vienna to Windhoek, Bogota to Bangkok, and Manila to Minneapolis.”

Indeed, Sajdik continued, the probability of another pandemic is high, thanks to a warming climate that will make the spread more likely, more deadly and more efficient.

“On Ebola, especially, we must seize this moment before another 9,000 are killed. The time to act is now, when the spotlight of the news is upon us and public opinion makes action palatable. This is the time to show that such pandemics can only be averted through long terms investments in the development of societies,” he declared.

Sajdik’s call to action echoes a similarly strong call he made in a Presidential Statement issued following a special meeting of ECOSOC in New York this past December, in which he stressed “we have to get the response right,” and emphasized that pledges for the Ebola response must have sustainable impact on the ground and leave behind the foundation for robust public health systems.