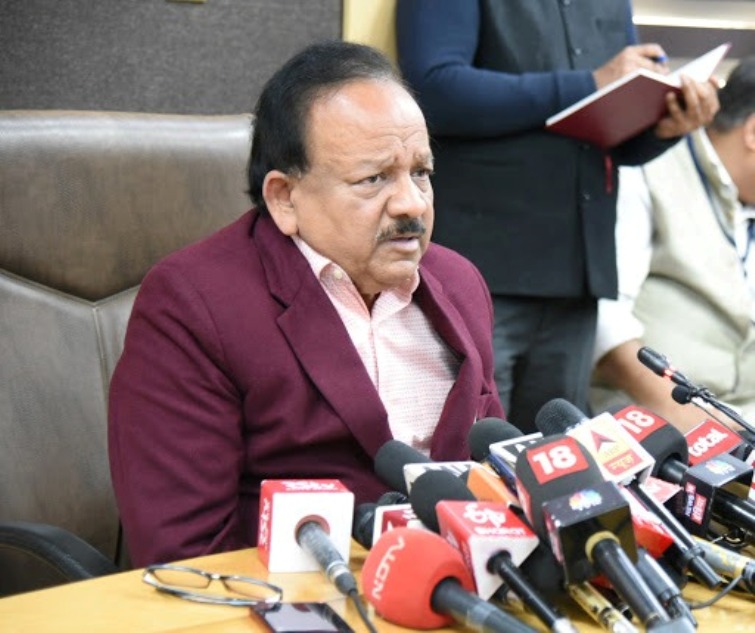 New Delhi/IBNS: Amid a global scared over the deadly Novel Coronavirus threat, which had an outbreak in China and claimed over 1100 lives so far, Union Health Minister Harsha Vardhan on Thursday asserted that political commitment at the highest levels is leading the government’s response on the matter.

"Political commitment at the highest levels of the Government, led by the Hon’ble Prime Minister Shri Narendra Modi is leading the government’s response against Novel Coronavirus Disease (COVID2019). India is prepared through its various timely measures and sturdy systems of surveillance for Novel Coronavirus," he said while addressing a press conference here on the status update, actions taken and preparedness on Novel Coronavirus disease in India.

He added that regular reviews are held with all related.

“We have good and effective co-ordination among ministries, robust surveillance system, a network of laboratories to support diagnosis, upgraded medical facilities, trained health workforce and media presence that can reach even remote areas. We have put all these resources at our disposal to prevent/contain the outbreak of novel coronavirus in India," he stated.

Harsh Vardhan stated that all Ministries and States have done commendable work, in particular Kerala, which has put up a sturdy system of surveillance.

Elaborating measures taken by the Government of India, Harsh Vardhan said that advisories/ guidelines have been issued to the states on surveillance, sample collection, packaging and transportation, infection prevention and control, and clinical management.

In fact, India was possibly the first country to issue a travel advisory on 17th Jan 2020 itself. All these guidance documents are available on the website of MoHFW. The travel advisory is being updated as per the evolving situation.

He also informed that surveillance at Points of Entry (PoE) is continuing at 21 Airports, 12 major ports, 65 minor ports and at 6 land crossings. So far at the airports a cumulative of 2, 51, 447 persons (2315 flights) have been screened, 3 suspected cases and 161 contacts have been identified.

5491 and 285 passengers and crew has been screened at major and minor ports respectively.  Integrated Disease Surveillance Programme (IDSP) is carrying out community vide surveillance of passengers travelling from China, Singapore, Thailand, South Korea and Japan.

A total of 15991 persons is being followed up for a period of 28 days of which 3058 have completed 28 days of observation period. 497 suspect cases have been isolated.

ICMR is providing the Laboratory support with NIV, Pune as the nodal laboratory and 14 other network laboratories. This can be expanded to include 50 laboratories if the situation so demands. So far 1071 samples have been tested, out of which 1068 were found negative and only 3 have tested positive in Kerala.

In addition, clinical samples of the 654 evacuees at Manesar and ITBP camps have also been tested and all of them were found to be negative.

All the 3 positive cases from Kerala are the students from Wuhan, Hubei, China.

"The observation was started from 28th January, 2020 and they were reported positive on 3rd February, 2020 by NIV, Pune. States have been asked to ensure adequate provisions for isolation facilities and critical care especially for ventilator support," he informed.

Harsh Vardhan further added that the surveillance at point of entries and in the community is the key to detect cases early, track the contacts and follow them up.

He reiterated that the COVID19 is highly infectious; however, the redeeming feature is that the case fatality is about 2% in mainland China and less that 0.2% outside China. Many of the epidemiological parameters of this disease are not known.

In the end, he thanked the media persons for their responsible reporting, hard work and sincere efforts to ensure the containment of COVID19 in India, by spreading awareness among the people and handholding with the stakeholders to share the correct information and to avoid rumours.