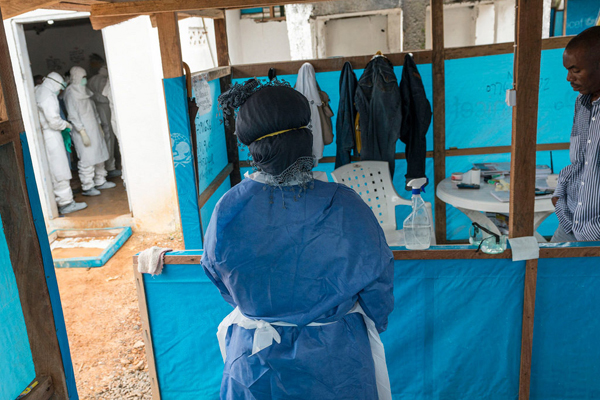 WHO spokesperson Tarik Jašarevic told a press briefing at the United Nations Office in Geneva on Tuesday that the sole subject of the meeting of experts would be the Ebola epidemic in West Africa. It was the first time the emergency committee would discuss Ebola.

“The idea is that the WHO Director-General is seeking an opinion of the emergency committee on whether the current outbreak represented a public health emergency of international concern,” Jašarevic said.

“If it does”, the spokesman said in response to a question, “then the committee would recommend to the Director-General of WHO to declare it a public health emergency of international concern and recommend appropriate temporary measures to reduce international spread” of the virus.

“We can’t speculate in advance what the committee members are going to decide in advance,” he said.

The agency is scheduled to hold a press conference with  Keiji Fukuda, WHO Assistant Director-General for Health Security at 9 a.m. Geneva time on Friday, 8 August, on the outcome of the meeting of the emergency committee, which might finish its work quite late at night on 7 August, the spokesman said.

As of 1 August, the number of Ebola cases stands at 1,603, including 887 deaths, in four countries; those countries are Guinea, Liberia, Nigeria and Sierra Leone. Human and financial resource mobilization continues to be sought from WHO’s partners, UN agencies, and other stakeholders.

The Ebola Virus Disease Outbreak Response Plan in West Africa launched on August 1 in Guinea is estimated at $100 million, with a funding gap of around $71 million to date.

According to WHO, Ebola, formerly known as Ebola hemorrhagic fever, affects humans and nonhuman primates (monkeys, gorillas, and chimpanzees). The origin of the virus is unknown, but fruit bats are considered the likely host.

Sudden onset of fever, intense weakness, muscle pain, headache and sore throat are typical signs and sympto This is followed by vomiting, diarrhoea, rash, impaired kidney and liver function, and in some cases, both internal and external bleeding.

According to the WHO website devoted to this topic, the responsibility of determining whether an event is within this category “public health emergencies of international concern” (PHEIC) lies with the WHO Director-General and requires the convening of a committee of experts – the International Health Regulations Emergency Committee.

This committee advises the WHO Director-General on the recommended measures to be promulgated on an emergency basis, known as temporary recommendations, it said.

Temporary recommendations include health measures to be implemented by the State Party experiencing the public health emergency, or by other States Parties, to prevent or reduce the international spread of disease and avoid unnecessary interference with international traffic, according to WHO.

A woman waits to enter an Ebola isolation ward to feed her husband, along with Liberian Ministry of Health, WHO, and Médecins Sans Frontières (MSF) personnel who are treating several Ebola patients located in the capital Monrovia. Photo: UNMIL/Staton Winter