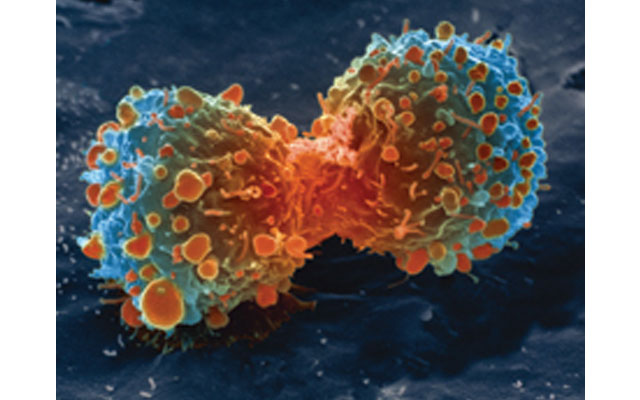 Researchers from the University of Sheffield have identified a specific modification to proteins that wrap around the DNA of cancer cells, protecting them from chemotherapy treatment.

Most types of chemotherapy and radiotherapy kill cancer cells by causing many breaks in the DNA – the blueprint that carries the information needed to make proteins, and for cells to survive, read the University of Sheffield website.

Unfortunately, cancer cells fight back by trying to fix the breaks through a toolkit of specialised armies, giving cancer resistance to therapy.

However the team from the Krebs Institute for Nucleic Acids at the University of Sheffield found that the key to preventing resistance to a common class of chemotherapy used to treat breast and colon cancer is to change the speed in which the cancer cells repair damage to their DNA that is introduced by chemotherapy.

Professor Sherif El-Khamisy, who led the research, said: “If we can find a way to hijack the cancer’s fix and repair toolkit and make it less efficient, then we can tip the scale in favour of cancer cell death instead of survival and prevent resistance to chemotherapy.

“We have discovered that resistance to a common class of chemotherapy, used to treat colon and breast cancer, is caused by changes in the speed by which the tool kit components travel to, and stay at, the sites of DNA breaks.

“Our researchers were able to identify a change in a specific mark in the proteins that wrap the DNA – called histones – in such a way that makes repair much faster in cancer cells, increasing their resistance to therapy.”

Professor El-Khamisy, a Wellcome Trust Investigator and the Director of Research and Innovation at the University’s Department of Molecular Biology and Biotechnology, has been working on the research for four years. The findings are published today (Friday 28 October 2016) in the journal Nucleic Acids Research.

“The change we identified is not genetic – but epigenetic,” said Professor El-Khamisy.

He added: “The team were able to inhibit the activity of the enzyme that controls the ‘scene’ ensuring that the film always has a happy ending – reversing the resistance of cancer cells.

“This means that patients who develop resistance to certain classes of chemotherapy can benefit from drugs that modulate histone marks such as histone deacetylase inhibitors, some of which are already approved by the Food and Drug Administration.

“We only focused on a class of chemotherapy used to treat colon and breast cancer called topoisomerase I inhibitors. It is possible that the same mechanism holds true for other classes of chemotherapy.”