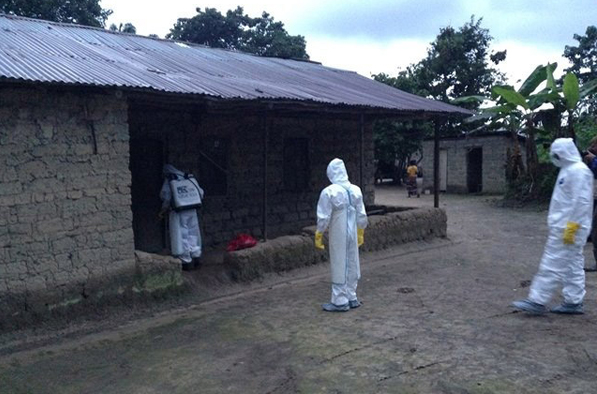 India Blooms News Service | | 31 Jul 2014, 11:48 am
#World Health Organization
New York, July 31 (IBNS) The United Nations World Health Organization (WHO) on Wednesday advised that while travellers should be aware of Ebola, they will not contract the highly-contagious, often fatal disease unless they actually touch someone who is showing active sympto

“So one can travel,” Gregory Hartl, WHO spokesperson on epidemic diseases said on Twitter, one of the social media sites where concerns of the spread of Ebola is generating much traffic on a day when a West African airline stopped flying to Liberia and Sierra Leone amid growing concern about the spread of the Ebola virus.

WHO has issued answers to questions about what is now being reported as the worst Ebola outbreak in history that has killed hundreds in West Africa.

WHO has also warned health workers deployed by relief organizations to strictly apply infection control measures recommended by the Geneva-UN health agency as there is currently no specific treatment to cure the disease.

“It's vital for health care workers deployed by relief and similar organizations to come fully trained, equipped to help respond to Ebola,” WHO said.

According to WHO, health workers treating patients with suspected or confirmed illness are at higher risk of infection than other groups, as demonstrated by the reports of doctors treating Ebola victims contracting the disease in West Africa.

The issue of personal safety is a concern for response teams, especially for medical workers in direct contact with patients.

“Prior to my arrival to Kenema, (Sierra Leone) I was scared about my own safety but I realized later that we can be in control of the risk,” says  Mauricio Ferri, a Brazilian intensive care specialist, deployed by WHO to one of the most affected areas of Sierra Leone since the outbreak was declared in late May. “We need to strike the right balance between caring for patients and our own security.”

Dr Ferri was deployed through the Global Outbreak Alert and Response Network (GOARN), a WHO-based network of experts and institutions that can assist with the international response to disease outbreaks.

According to WHO, Ebola, formerly known as Ebola haemorrhagic fever has a death rate of up to 90 per cent. The illness affects humans and nonhuman primates (monkeys, gorillas, and chimpanzees). The origin of the virus is unknown, but fruit bats are considered the likely host.

“Once a person comes into contact with an animal that has Ebola, it can spread within the community from human-to-human Infection occurs from direct contact (through broken skin or mucous membranes) with the blood, or other bodily fluids or secretions (stool, urine, saliva, semen) of infected people,” according to WHO.

Sudden onset of fever, intense weakness, muscle pain, headache and sore throat are typical signs and sympto This is followed by vomiting, diarrhoea, rash, impaired kidney and liver function, and in some cases, both internal and external bleeding.

“Travellers should be aware of #Ebola, and aware that if they do not touch someone who is showing active symptoms of the disease, then they cannot contract it,” Hartl told Twitter.

While there is no specific drug against Ebola, WHO says the best treatment is intensive supportive treatment provided in the hospital by health workers using strict infection control procedures.

As for airlines banning flights to countries of origin,  Olumuyiwa Benard Aliu, President of the International Civil Aviation Organization (ICAO) 36-member Council, said his agency works very closely with WHO in the area of travel advisories to prevent the transfer of communicable diseases.

Aliu said “sometimes Member States may decide to apply their own rules to protect their own nationals” but ICAO would advise its member states based on guidelines and advice it receives from WHO, he said.

WHO actions include: disease surveillance and information-sharing across regions to watch for outbreaks; technical assistance to investigate and contain health threats when they occur; advice on prevention and treatment options; deployments of experts and health supplies such as personal protection gear for health workers when they are requested by the country, as well as communication to raise awareness of the nature of the disease and protective health measures to control transmission of the virus.

WHO has set up a system of 300 community-based volunteers who monitor the Ebola situation and follow up close contacts of those who were infected. Photo: WHO/T. Jasarevic