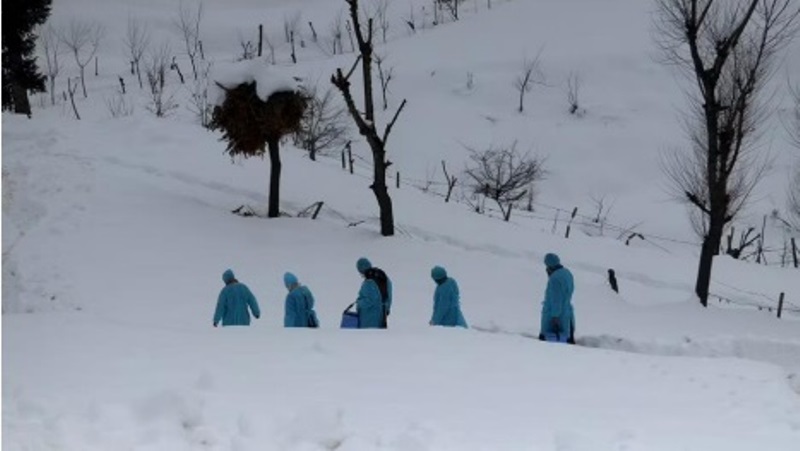 Budgam/IBNS: Having worked in the Health Department for several years, Abida Gani had an unusual task ahead of her Thursday, during a covid vaccination drive in the snow-bound upper reaches of Budgam district.

Abida, a resident of Budgam’s Khan Sahab area, reached Mujhpathri village well before noon with covid vaccination kits accompanied by several of her other team members.

Despite the bone-chilling cold, Abida reached out door to door to ensure 15 to 18-years-old were covered in the vaccination drive.

“There is no time to even take a tea break. We are not leaving behind any house and fulfilling our duty despite the huge snow accumulation,” said Abida.

She said health department officials even tried to create awareness among people to maintain social distancing and wearing of masks.

Abida is not the only Health Department worker who kept waiting at the main entrance of the village to conduct the vaccination drive.

In the Khan Sahab area, health workers, including Asha workers and nurses were also part of the covid19 vaccine drive.

Doctors who reached out to villages such as Lanilab, Basantwodur and Thajwodur in the upper reaches of Budgam said all possible steps were being taken to inoculate the entire population.