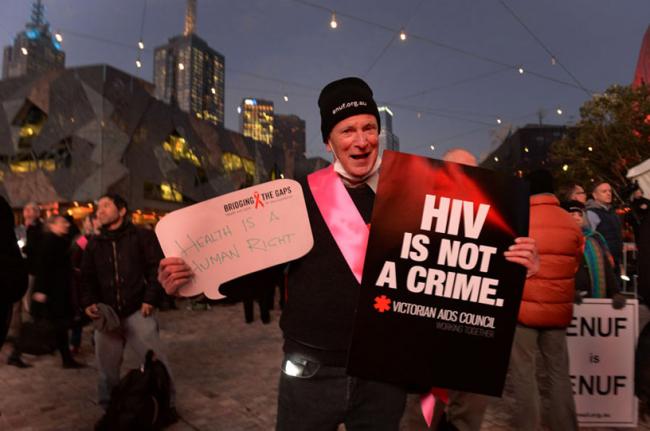 | | 04 Jul 2015, 12:33 pm
#AIDS
New York, July 4 (IBNS): Ending the AIDS epidemic â€“ in all places and all communities â€“ is essential to realizing the vision of a life of dignity for all, Secretary-General Ban Ki-moon declared Friday in Barbados at the Caribbean region launch of a major new United Nations report the calls for scaling up an inclusive, rights-based and stigma-free response to wipe out the deadly disease.

“A quarter of a million people in this region live with HIV. The governments here struggle to finance their responses,' said Mr. Ban at the launch in the region of study released today by the Joint UN Programme on HIV/AIDS (UNAIDS) and renowned medical journal, The Lancet.

The UN chief is in Barbados on an official visit in the context of the Caribbean Community (CARICOM) Summit, which he addressed last night.

The report, Defeating AIDS – Advancing Global Health was released in late June, and, among others warns that despite some advances in the battles against the disease, the rate of new HIV infections is not falling fast enough. As a result, the study calls for an urgent need to scale up AIDS efforts, calls on governments to ramp up HIV prevention efforts, and continue expanding access to treatment.

In his remarks today, Mr. Ban stressed that the epidemic is only made worse by punitive laws and stigma. These drive vulnerability to HIV infection – and block access to life-saving treatment.

The Secretary-General said the report has four main messages. First, the world has the knowledge, tools and know-how to end the AIDS epidemic by 2030, and the Commission that compiled the study spells out how to achieve this.

“Second, we need to urgently increase and fully fund our AIDS response. Today the world invests $19 billion annually in addressing AIDS. To reach our targets, we need to almost double this amount,” he said, calling for a rapid scale-up – led by countries, with critical support from global and private partners – over the next five years so the world will be on track to end the epidemic by 2030.

“Fourth, we can leave no one behind. AIDS will only end when we protect the human rights of all. This disease thrives on unjust power relations and inequalities. We have to battle all forms of societal ills including stigma, intolerance, discrimination and violence,” underscored Mr. Ban.

Continuing, he said that ending the epidemic would demand the achievement of gender equality. “We need to protect sexual and reproductive rights. And we need to give adolescents life-skills, including education about their sexuality.”

“AIDS is about more than human health – it is fundamentally an issue of human rights,” the UN chief said.