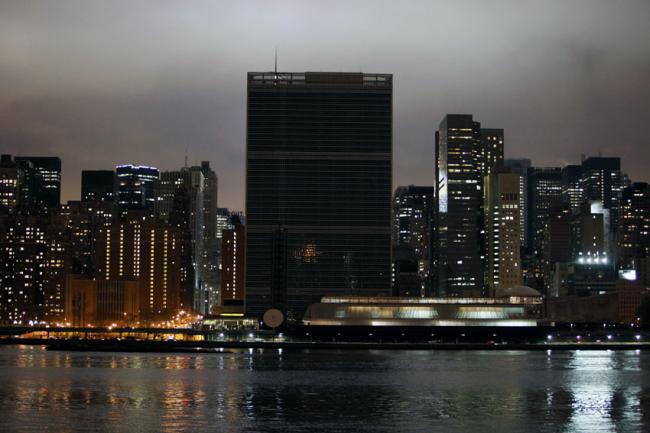 India Blooms News Service | | 29 Mar 2015, 09:45 am
#UN dims lights to focus attention on climate action, # earth hour
New York, Mar 29 (IBNS) The United Nations will go dark later this evening as the Organization shuts off the lights at its iconic Headquarters complex in New York and other facilities around the world in observance of 'Earth Hour,' an annual global event raising awareness about the need to take action on climate change and promoting sustainable energy consumption.

Organized by the World Wildlife Fund (WWF), Earth Hour encourages individuals, companies, organizations and Governments to switch off their lights for one hour at 8:30 p.m., local time worldwide, to focus attention on people-driven solutions to protecting the planet and building a bright, sustainable future.

The Secretary-General notes that this coming December in Paris, the United Nations will bring countries together to agree a new, universal and meaningful climate accord, culminating a “year of action” on sustainable development.

“By turning out the lights, we highlight that more than 1 billion people lack access to electricity. Their future well-being requires access to clean, affordable energy,” said Ban, stressing that with the world's lights being switched off, Earth Hour shows what is possible when the international community unites in support of a cause.

First launched in 2007, Earth Hour has become an annual event, mobilizing hundreds of millions of individuals to participate and growing to become the world's largest grassroots movement for the environment.

According to the WWF, the UN family will join the thousands of homes, offices, skylines and monuments that will go dark as the world unites to inspire collective action to change climate change. Over 1,200 landmarks such as the Eiffel Tower in Paris and the Golden Gate Bridge in San Francisco will turn off their lights. Close to 40 UNESCO World Heritage Sites including the Acropolis in Athens and Edinburgh Castle in Scotland are also scheduled to go dark in support of Earth Hour.