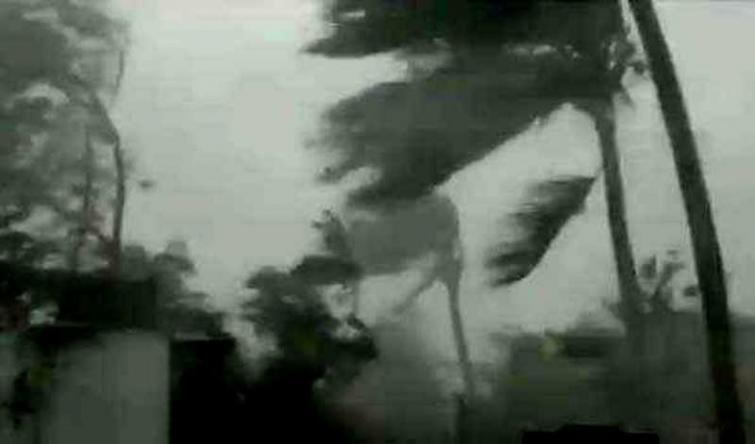 Fani to weaker into 'severe cyclonic storm' in next six hours: Officials

Rainfall of 13.9 cm during the past 6 hours has been reported, officials said.

Fani crossed Odisha between 8 am and 10 am this morning, triggering heavy rains coupled with high velocity wind with speed of 175 kmph in vast areas.

The IMD earlier in the day said that while damaging houses and uprooting thousands of trees and electricity poles, the eye of Fani, almost 25 km in diameter, is sending off wind velocity of 150 to 175 kmph and even above at some places touching 180 kmph or more.

The very severe #CyclonicStormFANI is very likely to continue to move north-northeastwards and weaken further into a severe cyclonic storm during next 06 hours.

Large areas in the seaside pilgrim town of Puri and other places were submerged in water as torrential rains battered the entire coastal belt of the state.

Several trees were uprooted and thatched structures destroyed at some places, including capital town Bhubaneswar.

Road communication was disrupted at many places and power connection snapped. Heavy rains still continued in many parts of coastal Odisha.

Cyclone Fani, the strongest storm to hit India since 2014, is weakening after barreling into Odisha, the chief of the state-run India Meteorological Department (IMD) said.

Heavy rains, along with strong winds, will continue throughout the day in Odisha, where more than a million people have been evacuated, K J Ramesh, Director General of the IMD earlier said.

"After making landfall this morning, cyclone Fani has started weakening and it's likely to enter Bangladesh by tomorrow evening," he said. "No cyclone ever had such a long duration in April."

Bhubaneswar reported maximum sustained wind speed of 98 kmph southwesterly wind at 1430 hrs ist of today. and rainfall of 13.9 cm during the past 6 hours.

Extensive damage to structure of AIIMS Bhubaneswar were reported due to Cyclone Fani. All patients, staff, students are, however, safe. Many water tanks have been blown off, lighting poles uprooted and air conditioners damaged. "We have enough supplies, ready to support the state," said Preeti Sudan, Secretary, Ministry of Health & Family Welfare.

All flights from Bhubaneswar have been cancelled from midnight.

In neighbouring West Bengal Dumdum airport will be shut from 3 pm today to 8 am tomorrow. More than 200 flights from Kolkata will be cancelled.

The cyclone very likely to move further north-northeastwards and emerge into Bangladesh on May 4 evening as a cyclonic storm, the Regional weather officials said.

Earlier, the Odisha Government had evacuated lakhs of people from the coastal areas to camps on higher grounds. At least 14 districts are in the path of the Cyclone Fani. People have been evacuated from Gajapati, Ganjam, Khurda, Puri, Naygarh, Cuttack, Jagatsinghpur, Kendrapara, Jajpur, Bhadrak and Balasore Mayurbhanj, Dhenkanal and Keonjhar which are expected to be badly impacted by the storm.

Nearly 11 lakh people have been evacuated in the last 24 hours. More than three lakh people were evacuated from Ganjam and 1.3 lakh in Puri. About 5000 kitchens have started operating to serve people in the shelters.