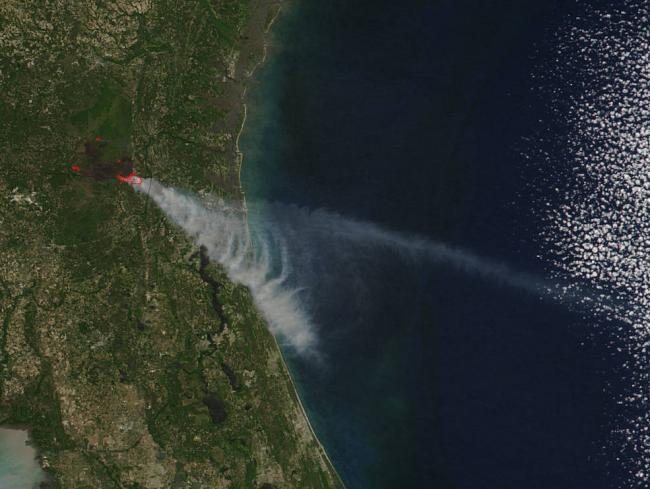 Smoke from wildfires can have lasting climate impact, says study

New research using data collected during NASA airborne science campaigns shows how smoke from this type of wildfire worldwide could impact the atmosphere and climate much more than previously thought.

The study, led by researchers at the Georgia Institute of Technology, found brown carbon particles released into the air from burning trees and other organic matter are much more likely than previously thought to travel to the upper levels of the atmosphere, where they can interfere with rays from the sun – sometimes cooling the air and at other times warming it.

“Most of the brown carbon released into the air stays in the lower atmosphere, but we found that a fraction of it does get up into the upper atmosphere, where it has a disproportionately large effect on the planetary radiation balance – much stronger than if it was all at the surface,” said Rodney Weber, a professor in Georgia Tech’s School of Earth & Atmospheric Sciences.

The research used air samples collected during two airborne science missions supported by researchers from NASA’s Langley Research Center in Hampton, Virginia — the 2012 Deep Convective Clouds and Chemistry (DC3) mission and 2013 Studies of Emissions and Atmospheric Composition, Clouds and Climate Coupling by Regional Surveys (SEAC4RS) mission. DC3 made observations in the central U.S. and SEAC4RS covered parts of the southeast and western U.S.

Researchers found surprising levels of brown carbon in the samples taken from the upper troposphere — about seven miles above the Earth’s surface — but much less black carbon.

While black carbon can be seen in the dark smoke plumes rising above burning fossil or biomass fuels at high temperature, brown carbon is produced from the incomplete combustion that occurs when grasses, wood or other biological matter smolders, as is typical for wildfires. As particulate matter in the atmosphere, both can interfere with solar radiation by absorbing and scattering the sun’s rays.

According to other research conducted by NASA in recent years, the increase in brown-and-black-carbon-producing wildfires that rage across the U.S. every year could itself be a symptom of a warming world. A 2015 analysis of 35 years of meteorological data confirmed that fire seasons have become longer. In addition, climate models predict fire seasons will continue to increase in length and strength across the U.S. in the next 30 to 50 years.

As carbon particulates released by those fires migrate higher into the atmosphere, the climate becomes more sensitive to them. The researchers found brown carbon to be much more likely than black carbon to travel through the air to the higher levels of the atmosphere where it can have a greater impact on climate.

“People have always assumed that when you emit this brown carbon, over time it goes away,” said Athanasios Nenes, a professor in Georgia Tech’s School of Earth & Atmospheric Sciences and the School of Chemical & Biomolecular Engineering.

After brown carbon is carried by smoke plumes into the lower atmosphere, it mixes with clouds. Then it hitches a ride in upward convective flow in clouds and travels to the upper atmosphere.

Although the researchers couldn’t explain how, they also found during the upward journey through clouds, the brown carbon became more concentrated relative to black carbon.

“The surprise here is that the brown carbon gets promoted when you go through clouds, compared to black carbon,” Nenes said. “This suggests that there may be in-cloud production of brown carbon we were not aware of before.”

“That’s all the more reason to conduct additional studies”, according to Bruce Anderson, an atmospheric scientist at Langley.

“We need better information on how those aerosols are formed, what their radiative impacts are, how they’re removed from the atmosphere and whether there’s anything we can do to control that,” he said.