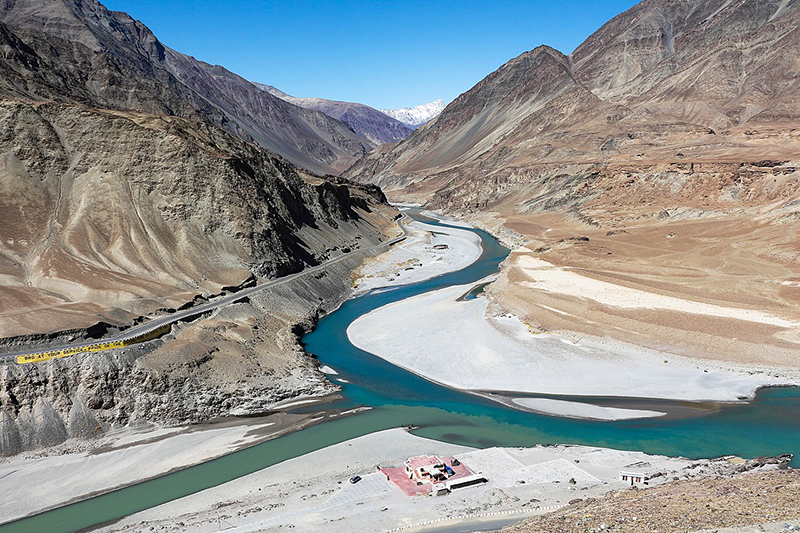 India and Pakistan can better manage water resources to reduce impacts of climate disasters. Raksha Kumar, Khuldune Shahid and Ghulam Mustafa report from across the border

It took the world less time than expected to make the journey from adapting to climate change to dealing with a climate emergency. The only way to fight it, experts agree, is to work together. This is especially true in densely populated regions like South Asia, home to about one in four people in the world.

India and Pakistan are the only two nuclear-armed nations in the Hindukush region that have fought four wars, but are in immediate need for climate solutions with 2022 being a tipping point for the neighbouring countries

While Pakistan experienced the worst flooding in its recorded history affecting more than 33 million people, India faced successive droughts and heat waves pushing it to the bottom tier of the Global Hunger Index.

“These concerns are overlaid by changing demographics in India and Pakistan, increased urbanisation, and rising demands on the agricultural and industrial sectors,” says Medha Bisht, senior assistant professor at the Department of  International Relations at South Asian University, New Delhi. “This has contributed to making both countries, particularly Pakistan, among the most water stressed in the world.”

While world leaders made pledges at the 2022 UN Climate Change Conference in Sharm el-Sheikh, experts in India and Pakistan said there are implementable solutions closer home.

Before the British left the subcontinent, the large contiguous land mass that is now India and Pakistan were served by the Indus river and its tributaries. In the wake of Partition of the two countries and subsequent mass migration – the largest in the world – the leaders of the countries negotiated a treaty under the World Bank’s supervision.

The Indus Water Treaty gives India control over the waters of the three "eastern rivers" – the Beas, Ravi and Sutlej, while Pakistan controls the three "western rivers" — the Indus, Chenab and Jhelum.

The treaty has survived wars, skirmishes and international conflicts between the two countries over the disputed region of Kashmir, from where the rivers originate. But, climate emergencies threaten to break what wars could not.

A 2021 Parliamentary Report by the Government of India worries climate change is largely ignored by the Treaty, which was agreed based on the knowledge and "technological imperatives” available at the time it was negotiated, the 1950s.

Climate observers in India say ineffective water usage and climate emergencies have made the region a tinderbox. A smallest spark is all that is required.

In 2016, Kashmiri militants attacked an Indian Army brigade headquarters in Uri town of Indian Administered Kashmir, killing 19 Indian soldiers, triggering a flashpoint between the two hostile neighbours. An unintended casualty of the attacks was water sharing between the two countries.

While the treaty was not breached, India revived hydel power projects on the eastern rivers that lay dormant until then. Projects such as the 800MW Bursar hydroelectric project on the Marusudar river, one of the tributaries of the Chenab, in Kishtwar district of Indian Kashmir and Shahpur-Kandi project in Gurdaspur district of Punjab were re-started.

Azeem Ali Shah, a Lahore-based researcher with the International Water Management Institute (IWMI), told thethirdpole.net, “A unilateral withdrawal from the Treaty will bring the World Bank into the dispute. It will also incite further anxiety among Pakistani people and might lead to violence.”

When India and Pakistan have bilateral disputes over water, they have tended to revolve around hydro-power projects and rationing water. Concerns around water quality or effective use remain largely ignored. As a result the treaty has become about quantitative water sharing as opposed to qualitative and effective use of water.

While the Indus Water Treaty looks at the macro perspective on water governance between the two countries, there are micro narratives on water diplomacy.

“One of the main challenges for water usage across South Asia, and especially in India and Pakistan, is the water-intense form of agriculture,” writes Omair Ahmad, managing editor for South Asia at The Third Pole.

“In both these countries most of the water, around 80%, is devoted to growing crops. More importantly much of this water is simply wasted. Both of these countries use a form of rice cultivation in which the crop is grown in standing water, and much of this water simply evaporates. More problematically, large amounts of water are transported through leaky canal structures over long distances, evaporating on the way, and ending up diverting far more water than is actually needed to grow the crops,” he notes.

Among these is the centuries-old Rajaki in Hunza Valley, which is a community-based piping network designed for high altitude terrains that can be found in Pakistan's north and northwest. In Hunza, the locals build pipes that are designed to supply villages water from high altitude glaciers. Locals deem it a communal technique since it unites the entire community in ensuring that not only does every village nearby and their households get their share of water, but also that water wastage is minimised to further ascertain better supply and usage.

Another centuries-old water management method, common in Pakistan’s western Balochistan province, is Karez. The well-like vertical shafts are interconnected through tunnels, which transport subterranean water to the surface. 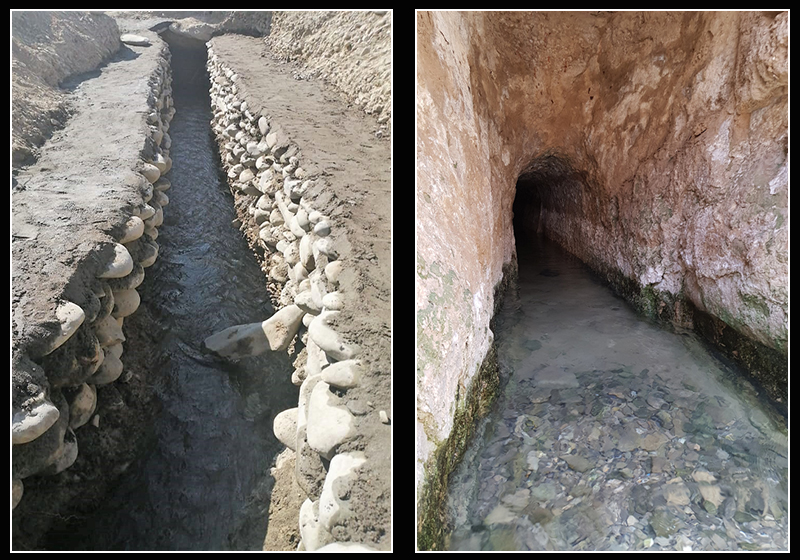 Karez, common in Pakistan’s Balochistan province, are vertical shafts interconnected through tunnels that transport subterranean water to the surface. The system has long ensured water reaches the surface without manual or mechanical pumping, which reduces energy used to transport water and water lost through evaporation. (credit BRACE)

The vertical tunneling system has long ensured that water reaches the surface without any manual or mechanical pumping. The Karez system not only significantly reduces the energy being expended on transporting water, it also reduces water losses via evaporation, making the technique especially useful in hot and dry climates.

Karez too, like Rajaki, has historically required collective community maintenance allowing water management to be used as a means of societal adherence, which helps address conflicts in volatile regions like Balochistan – something that both Pakistani and Indian governments can learn from.

On the Indian side of the border, in the upper reaches of Jammu and Kashmir and Ladakh region, locals use a method to collect water from melting glaciers. They call it Zing. These are small man-made tanks that collect water melted from the glaciers during the summer months. They use it in other seasons. 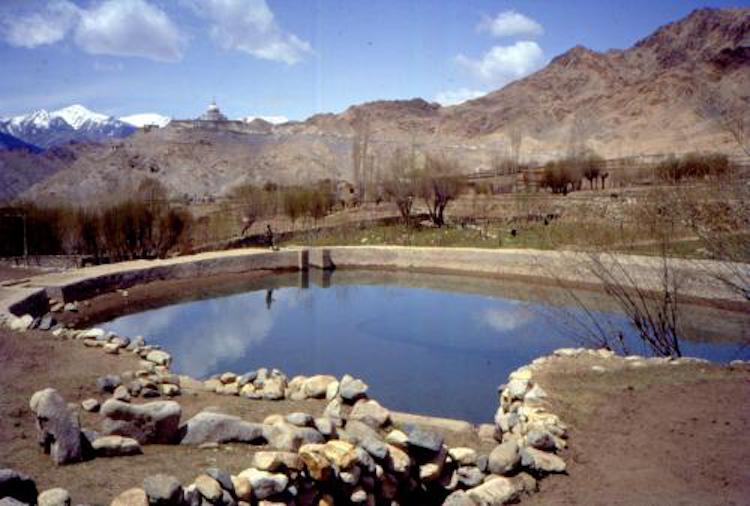 Zing: Image courtesy Down To Earth

In 2019, the government of Indian Punjab submitted a rain water harvesting plan. Seventy percent of the population depends on groundwater for drinking and irrigation purposes, so they needed to revert to traditional methods to ensure there was enough groundwater for a rapidly-growing population.

Observers like Bisht say only more dialogue between the civil societies of the two countries will bring about lasting positive changes. “This is the reason why water sharing alone cannot become the focus of the relationship,” she said. “Water management should be the way forward,” she added.

(About the authors: Raksha Kumar is a freelance journalist based in Bangalore, India. Khuldune Shahid is a correspondent for The Diplomat, based in Lahore, Pakistan. Zeeshan Javaid is a special correspondent with The News Today/92News TV in Islamabad, Pakistan. This report is part of a week-long cross-border reporting workshop held in Kathmandu, Nepal, organised by the US based East-West Center.)