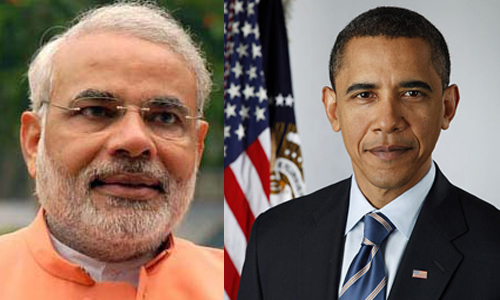 The open letter notes three issues that President Obama should address to improve US leadership in addressing climate change: the US case under World Trade Organization (WTO) rules against India’s domestic content requirements for the solar sector, Arctic oil drilling, and federal coal leasing in the US.

The letter also asks Prime Minister Modi to “take note of the campaign of intimidation that the Indian Ministry of Home Affairs is currently engaged in against Greenpeace India and other legitimate NGOs.”
The UN Special Rapporteur has recently criticised India’s actions in suppressing civil society and ‘vilifying’ voices of dissent.”

Over the last year, the Ministry of Home Affairs has frozen Greenpeace India's bank accounts, prevented Greenpeace staff (including Indian citizens) from entering and leaving the country and cancelled the group's license to receive donations from abroad. In fact, on the very eve of the Prime Minister’s address to the United Nations, the organisation’s primary bank account was frozen, once again denying Greenpeace access to donations received directly from its Indian supporters.

These actions, the letter states, threaten to tarnish India’s international standing as a country that respects free speech and democracy.  As the letter points out, when it comes to tackling climate change and meeting the UN’s Sustainable Development Goals, a healthy dialogue with civil society can significantly strengthen government's’ efforts to hold developed countries to their climate obligations, and uphold the rights of developing nations such as India.
Related Images