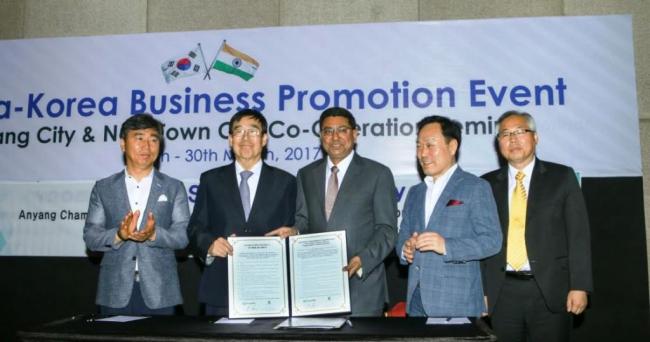 The aim is to promote, strengthen and develop trade, investment as well as economic, scientific and technological collaboration between the two cities.

Phil Woon Lee, Honorable Mayor, Anyang City stated that the similarities between Kolkata and Anyang are striking and give both the cities immense opportunities to collaborate and move to a path of strong trade ties. Anyang city has witnessed growth in every domain and Kolkata can utilize this to develop close trade and investment conglomeration going ahead. This would not only drive economic growth for the two cities but also development of the two nations at large.

He felt that India has the potential to exceed to other superpowers and Kolkata will play a key role in this regard. Over the last two years, a strategic partnership has evolved between Korea and Kolkata, and both have a long way to go. According to him, the MoU will harness the distinctive characteristics of the two cities that will lead to technological, trade and economic growth. It would lead to the development of a local economy between the two cities and rapid economic growth of the two nations.

Sanjay Budhia, Past President, ICC & Managing Director, Patton International Ltd. stated that Kolkata, West Bengal is the gateway to the North-Eastern part of India and plays a significant role in the GOI’s Act East Policy. The city is endowed with significant opportunities for trade and investment. Anyang and Kolkata collaboration can benefit both the cities in terms of establishing a strong relation in areas of Agro-processing, IT, plastics etc. In this regard, the Indian Chamber of Commerce can play a significant role by extending its support to South Korea in forging such partnership between both the cities.