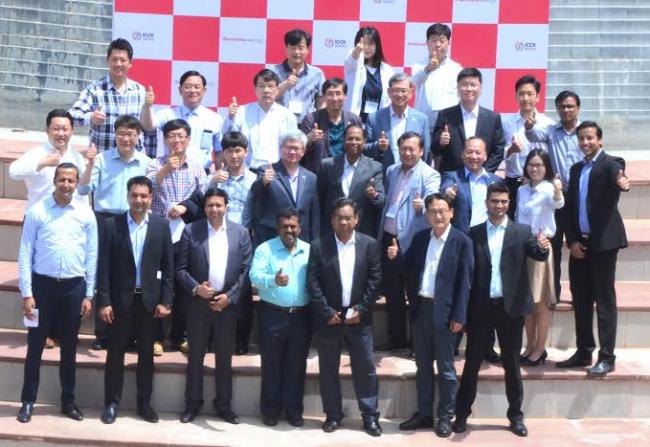 The 20-member delegation, representing 11 Korean companies in the automotive, electronics and manufacturing sectors, and three government agencies, was on a week-long tour of India to explore investment and partnership opportunities in the country. At both MWC Chennai and MWC Jaipur, members of the Korean delegation met and interacted with various on-site companies to better understand their experiences in setting up operations at the integrated business cities and various advantages therein.   As part of the tour, the delegation also met representatives of 45 companies in the automotive and engineering sectors during special B2B meetings organised by CII and the ICCK.  The initiative was supported by Korea’s Ministry of Trade, Industry and Energy (MOTIE) and the Confederation of Indian Industry (CII), while the visit was arranged by the Indian Chamber of Commerce in Korea (ICCK). Welcoming the delegation,  Sangeeta Prasad, Chief Executive Officer, Integrated Cities and Industrial Clusters, Mahindra Lifespace Developers Limited said, “We are honoured to host our guests from Korea at the Mahindra World Cities and look forward to developing deeper partnerships with Korean industry. As pioneers of sustainable integrated business cities in India, we help our customers focus on their core business areas by providing world class infrastructure and an enabling ecosystem that facilitates faster go-to-market and accelerated business growth.” At MWC Jaipur,  Sock Joong Yoon, Secretary General, ICCK, added, “Well-planned infrastructure is a key driver for business success globally.  MWC Jaipur’s vision for inclusive growth encompassing local communities, the economy and the environment makes it an ideal business destination for any organisation seeking to consolidate its position in both Indian and global markets.”  The delegation visited MWC Jaipur on 10th June. “This is our first visit to India and Tamil Nadu. We are happy to see a planned integrated business city like Mahindra World City (MWC) and we believe this will be a great investment opportunity for companies from Korea. We may also consider investing at MWC for our project in India,” said  Dong Hoon Lee, Management Team - Business Strategy, Bujeon Electronics while visiting MWC Chennai along with the rest of the delegation on June 7.