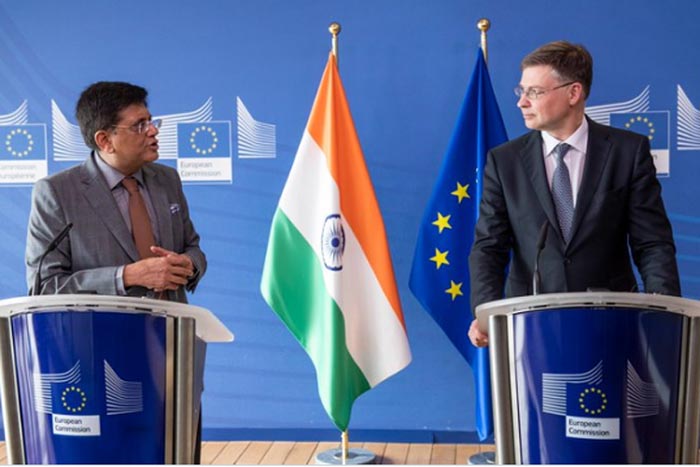 Besides, negotiations were also launched for a stand-alone Investment Protection Agreement (IPA) and a Geographical Indicators (GIs) Agreement.

Last year, in the India and EU Leaders’ Meeting held in Porto on 8th May 2021, an agreement was reached for resuming negotiations for a balanced, ambitious, comprehensive and mutually beneficial FTA and starting fresh negotiations on the IPA and a separate agreement on GIs.

Both partners are now resuming the FTA talks after a gap of about nine years since the earlier negotiations were left off in 2013 due to difference in the scope and expectations from the deal.

The Delhi visit of the European Commission President Ms. Ursula von der Leyen in April 2022, and the Prime Minister Shri Narendra Modi’s recent visit to Europe accelerated the FTA discussions and helped in defining a clear roadmap for the negotiations, read a government statement.

This would be one of the most significant FTAs for India as EU is its second largest trading partner after the US.

A first round of negotiations covering the three areas of work will be hosted by India in New Delhi from 27 June to 1 July 2022. 👇https://t.co/6HO6oZvlaq https://t.co/ReGH48tiIM

Considering that both partners have similar fundamental values and common interests and are two of the largest open market economies, the trade deal will help to diversify and secure the supply chains, boost economic opportunities for our businesses, and bring significant benefits to the people. Both sides are aiming for the trade negotiations to be broad-based, balanced and comprehensive, based on the principles of fairness and reciprocity.

There will also be discussions on resolving the Market Access Issues which are impeding the bilateral trade.

While the proposed IPA would provide a legal framework for cross-border investments to enhance the confidence of investors, the GI pact is expected to establish a transparent and predictable regulatory environment, to facilitate trade of GI products including handicrafts and agri-commodities.

Both parties are aiming to negotiate all the three agreements in parallel and conclude them simultaneously.

The first round of negotiations for all the three agreements will be held from 27th June to 1st July 2022 in New Delhi.

India earlier this year has concluded FTAs with Australia and the UAE in a record time.

The FTA talks with Canada and the UK are also underway.