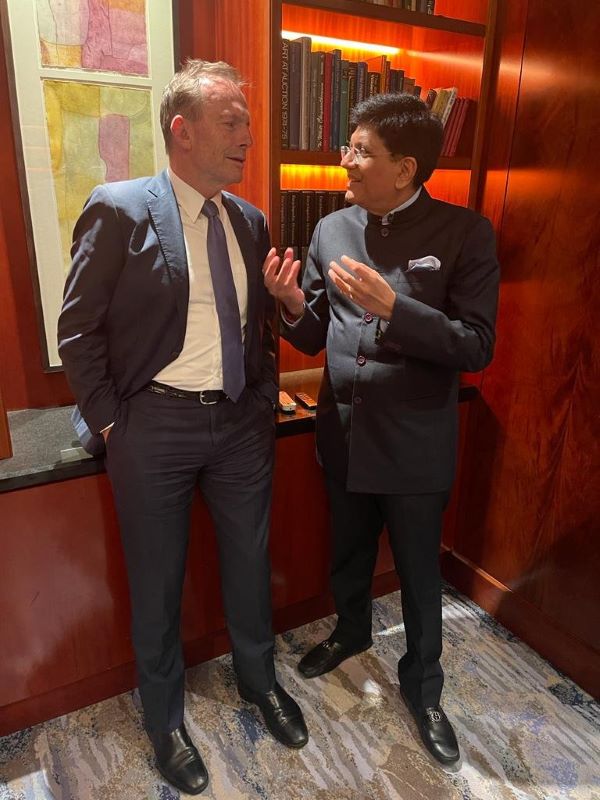 His visit comes days after India and Australia signed the Economic Cooperation and Trade Agreement (IndAus ECTA) on Saturday, April 2.

I am delighted to be in Australia on a three day visit to explore prospects for boosting India-Australia trade, investment & economic ties. #IndAusECTA has opened the doors for a much closer & stronger bilateral engagement. 🇮🇳🇦🇺

"During the visit, I will take the ECTA to people," Goyal said, adding that interactions had been planned with business leaders, Indian students, diaspora, etc.

During the visit, Goyal will hold wide-ranging discussions with his Australian counterpart, Dan Tehan MP, Minister for Trade, Tourism and Investment, on carrying forward the ECTA, the ministry said.

ECTA is the first trade agreement of India with a developed country after more than a decade and provides for an institutional mechanism to improve trade between the two countries.

It was a pleasure meeting Australian PM's Special Trade Envoy for India @HonTonyAbbott in Melbourne.

He has played a key role in realising the #IndAusECTA. Discussed how both countries can build on this deal to increase supply chain resilience in the Indo-Pacific region. pic.twitter.com/wXdh6fHPjD

Amid his packed schedule, the minister will visit the University of Melbourne and Australia India Institute on Wednesday.

Goyal will also visit the landmark Melbourne Cricket Ground and address the Australia-India Chamber of Commerce and Austrade, along with Minister Dan Tehan, besides interacting with the Indian media.

He will later visit the Shiva Vishnu Temple in Melbourne and attend a Community event with the Indian Diaspora.

On Thursday, April 7, Goyal and Minister Dan Tehan will address and interact with students at the University of New South Wales in Sydney and pay tributes at the statue of Mahatma Gandhi in the University campus.

Later in the evening, Goyal, accompanied by Minister Dan Tehan and Minister Alex Hawke, Minister for Immigration and Multicultural Affairs, will attend a Community event at the Swaminarayan Temple in Sydney.

ECTA is expected to create new employment opportunities, raise living standards and enhance the overall welfare of the people of both countries.

Additional employment generation is expected to be 10 lakhs within the next five years.