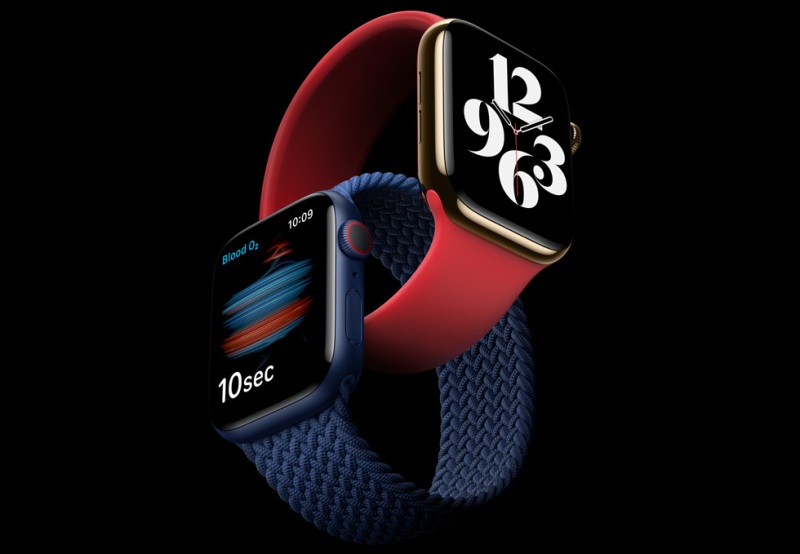 Apple Watch Series 6 expands the health capabilities of previous Apple Watch models with a new feature that conveniently measures the oxygen saturation of the user’s blood, so they can better understand their overall fitness and wellness.

Oxygen saturation, or SpO2, represents the percentage of oxygen being carried by red blood cells from the lungs to the rest of the body, and indicates how well this oxygenated blood is being delivered throughout the body.

To compensate for natural variations in the skin and improve accuracy, the Blood Oxygen sensor employs four clusters of green, red, and infrared LEDs, along with the four photodiodes on the back crystal of Apple Watch, to measure light reflected back from blood.

Apple Watch then uses an advanced custom algorithm built into the Blood Oxygen app, which is designed to measure blood oxygen between 70 percent and 100 percent.

On-demand measurements can be taken while the user is still, and periodic background measurements occur when they are inactive, including during sleep.

All data will be visible in the Health app, and the user will be able to track trends over time to see how their blood oxygen level changes.

Apple is joining forces with researchers to conduct three health studies that include using Apple Watch to explore how blood oxygen levels can be used in future health applications.

This year, Apple will collaborate with the University of California, Irvine, and Anthem to examine how longitudinal measurements of blood oxygen and other physiological signals can help manage and control asthma.

Separately, Apple will work closely with investigators at the Ted Rogers Centre for Heart Research and the Peter Munk Cardiac Centre at the University Health Network, one of the largest health research organizations in North America, to better understand how blood oxygen measurements and other Apple Watch metrics can help with management of heart failure.

Finally, investigators with the Seattle Flu Study at the Brotman Baty Institute for Precision Medicine and faculty from the University of Washington School of Medicine will seek to learn how signals from apps on Apple Watch, such as Heart Rate and Blood Oxygen, could serve as early signs of respiratory conditions like influenza and COVID-19.

Apple Watch Series 6 offers faster charging, completing a full charge in under 1.5 hours, and improved battery life for tracking certain workouts, such as indoor and outdoor runs.
An enhanced Always-On Retina display on Apple Watch Series 6 is up to 2.5 times brighter than Apple Watch Series 5 outdoors when the user’s wrist is down, making it much easier to see a watch face in bright sunlight.

When their wrist is down, the user can also now access Notification Center and Control Center, tap on complications, and swipe to change faces without having to wake their watch screen.

Apple Watch Series 6 (GPS) is available to order today from apple.com and in the Apple Store app, with availability beginning Friday, September 18, in the US, Puerto Rico, and 27 other countries and regions.