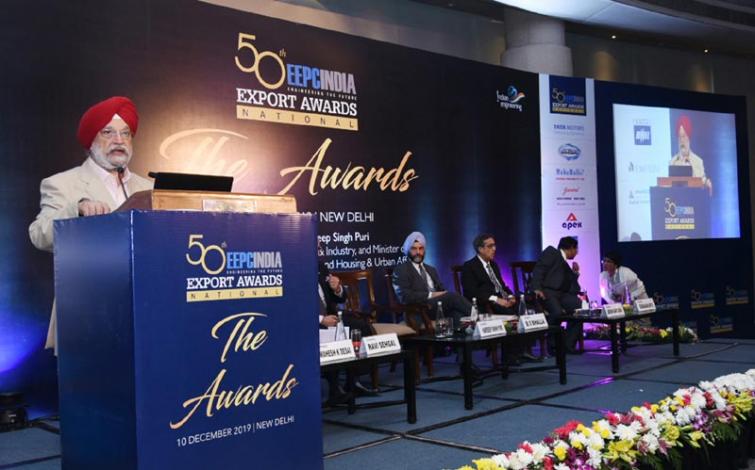 Kolkata/IBNS: India's junior Minister of Commerce and Industry Hardeep Singh Puri has asked engineering exporters to more than double their shipments in the next five years to US$150 - 200 billion.

Talking at an event of Engineering Export Promotion Council of India (EEPC), marking the EEPC India National Export Awards of 2017-18,  he said the government has formulated a short and medium-term strategy to give a push to exports.

The minister said, ''In essence, we are trying to provide whatever support you, as exporters, need from the government.”

After wide consultations and interactions with the exporters, he said, the Commerce Ministry has formulated strategies for resolving the specific problems faced by the exporting community.

Puri, who is also the Union Minister for Housing and Urban Development and Civil Aviation, said the government is framing a new scheme to improve bank credit to exporters.

The minister said efforts are also being made to increase India's exports to emerging markets of Africa and Latin America through Preferential /Free Trade Agreements.

On the issue of Non-Tariff Barriers, he said, such barriers relating to the engineering sector have been identified specific to countries concerned where, for instance, test reports of the Central Power Research Institute are not accepted.

To make duty refunds schemes compatible with multilateral rules, the government has already announced the Remission of Duties or Taxes on Export Products (RoDTEP) scheme which will replace the MEIS, the minister said.

In his welcome address, EEPC India Chairman Ravi Sehgal said that while engineering exports achieved a record performance of US$81 billion in 2018-19, the sector is facing global head winds.

"There are still four months left of this financial year," Sehgal said, expressing hope and urging the government to extend support like making essential raw materials for steel available at international prices.

The EEPC India is  expecting maximum and high-quality participation at its annual flagship international sourcing show IESS, to be held at Kovai city (Coimbatore) in the first week of March 2020.

Before that, in the last week of January, EEPC India’s overseas exhibition - INDEE – will be held in Bangladesh, which is emerging as a key market for engineering exports.

Sehgal said that with the help of technology development centres, the focus of country's export strategy must be on value-addition.

In all, 111 engineering exporters were given the EEPC India National Export Awards
for 2017-18 across eight categories and over 32 product panels.

This year, for the first time, QCI was invited to evaluate companies and the EEPC India-QCI Quality awards were given to seven companies.