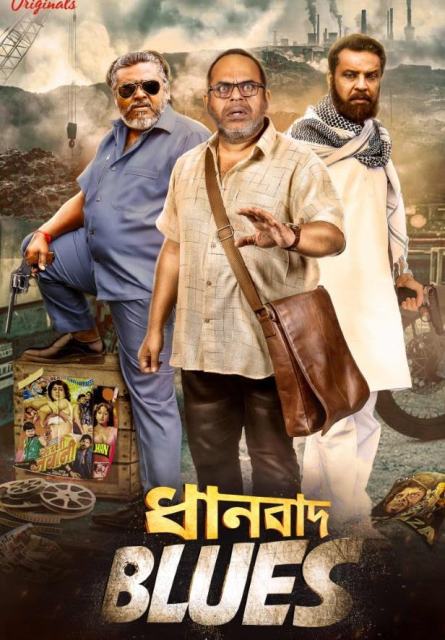 Kolkata, Dec 7 (IBNS):: Dhanbad Blues – hoichoi's latest Original, revealed its poster on December 5 which had veteran actor, Rajatava Dutta (who plays a failed filmmaker) along with Dev D starrer, Dibyendu Bhattacharya (who plays a strict mafia-man) and Slumdog Millionaire actor, Imran Hasnee (who plays a corrupt but pretending to be clean political leader).

Today, in front of media, the much-awaited Trailer was launched at a press conference in the presence of cast Rajatava Dutta, Dibyendu Bhattacharya, Solanki, Rupanjana Maitra and director, Sourav Chakraborty along with producer & popular TV sensation, Madhumita Chakraborty.

Dhanbad Blues, streaming from 15th December, is the story of a film director by the name of Mrinal Sen, around 40 years of age and residing in North Kolkata, along with a dozen of other tenants. He shares a tremendous passion for filmmaking but is persistently hounded by bad luck. What keeps Mrinal from falling apart completely in face of such adversity is his dream of making his mark in cinema.

During such a bleak time, the phone rings one day. A voice asks him, “Do you wish to make a film for me?”

He is too depressed to make films anymore. On the caller’s persistence, Mrinal replies, “Yes, but only if you pay me twenty lakhs,” thinking this demand will shake the caller off. But to his utter surprise, the caller agrees. A hefty advance soon finds its way to his bank account. Slightly incredulous at the unexpected stroke of good luck and bolstered by his young assistant’s urging to explore the opportunity, the director travels to Jharkhand to meet his unknown benefactor and finds himself in the colliery region, ruled by the local mafia.

The film is announced, and the offer is made. To the visitors’ utter surprise and disgust, it is revealed to be a pornographic film! Completely aghast at the proposal, the director wants to walk away, but is told that there’s no going back now. He tries to escape but is caught. He tries to fight with the producer’s sidekicks but is overwhelmed by them. He is given 10 days’ time to complete the film or face dire consequences.