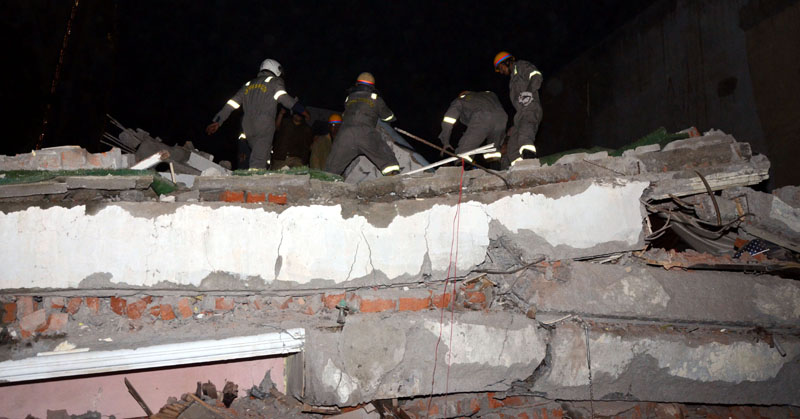 Lucknow: Rescue work is ongoing at the site of the four storey building that collapsed in Wazir Hassan road in Uttar Pradesh capital Lucknow  on Tuesday evening.

Director General of Police DS Chauhan has updated that 12 people have been rescued so far from the site of the building collapse.

"Till now 12 have been rescued, it is estimated that around 24 people were trapped inside the debris, the NDRF and SDRF have breached the accident site from three places from where rescue efforts are being made," said the DGP.

He said that JCB machines and other resources are working on the spot.

"It's an unfortunate incident. Till now three bodies have been recovered which have been sent to the hospital. We are making all efforts to save the people alive. As of now only a guess can be made and the real picture will emerge after sometime," they said.

Initially the Deputy Chief Minister Brijesh Pathak had said that three bodies had been recovered from the rubble though later DGP DS Chauhan and Principle Secretary(Home) Sanjay Prasad claimed that no casualty has been reported so far.

Meanwhile, Chief Minister Yogi Adityanath has taken cognizance of the incident in which an old building collapsed.

He has directed the officials of the district administration to take the injured to the hospital immediately for their proper treatment.