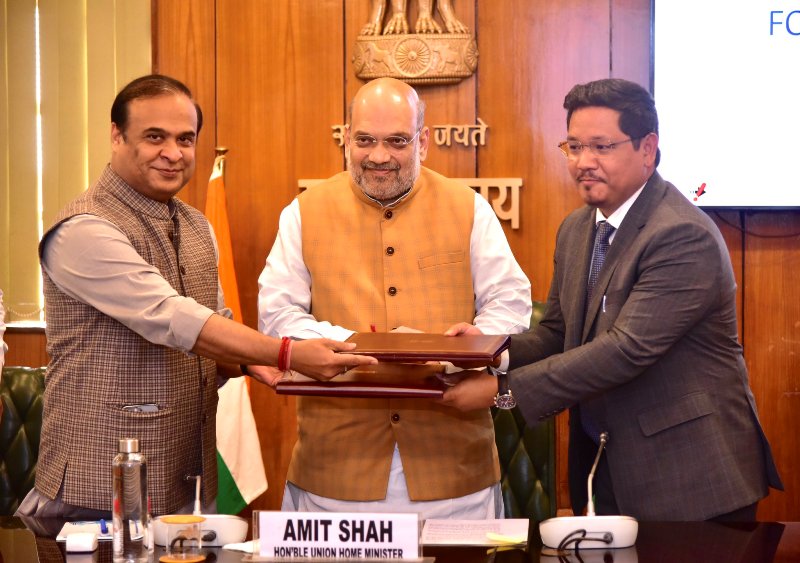 New Delhi/IBNS: Assam Chief Minister Himanta Biswa Sarma and his Meghalaya counterpart Conrad Sangma on Tuesday signed an agreement regarding their border disputes that have been pending for 50 years.

The two chief ministers signed the pact at the Union Home Ministry in Delhi, in the presence of Home Minister Amit Shah and officials from both states.

Called it a "historic day", Shah credited Prime Minister Narendra Modi for focussing on the peace process in the northeast.

The agreement is aimed to resolve the protracted dispute in six of the 12 places along the 884.9 km border between the two states.

Historic day for the North-East. The signing of the interstate boundary settlement between the states of Assam and Meghalaya. Watch live! https://t.co/hvHL4lipun

With the signing of the agreement, Shah said 70 per cent of the border dispute between the two states has been resolved.

There are 36 villages in the six places, covering an area of 36.79 sq km, with regard to which the agreement has been reached.

Out of the 12 points of dispute between Assam and Meghalaya, the six areas with relatively less critical differences were taken up in the first phase.

Sangma thanked the Home Minister and also credited the development to his Assam counterpart.

"Today the first phase of the resolution has been done. It could only be possible because of Assam CM Himanta Biswa Sarma," he said.

"There has been a lot of push from Prime Minister and Home Minister that they would like to see that these differences (Assam-Meghalaya border issue) are resolved because if India and Bangladesh can resolve the border issues then why can't the states also. This is the stand they took," said Sangma.