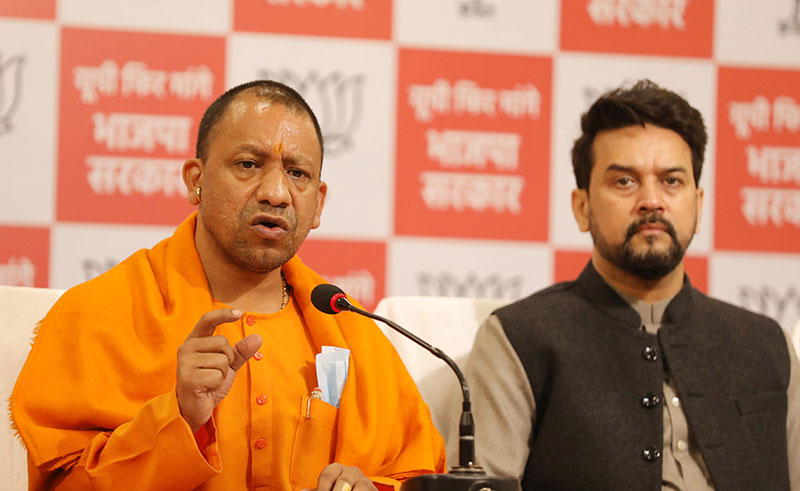 Lucknow/IBNS: A week ahead of the beginning of the Uttar Pradesh assembly elections, Chief Minister Yogi Adityanath on Thursday claimed his government has accomplished works, which were not done in decades, in just five years, media reports said.

Adityanath said, "I would like to highlight that what could not be done in decades has been done in just 5 years. Today, UP is ranked 2nd in India."

Boasting on his performance in tackling COVID-19 pandemic, he said, "The last two years were a challenge not just for UP, but the entire world because of the COVID pandemic."

"The pthreat was not just for life, but also livelihood. But I want to thank the Prime Minister for leading the nation and helping it rise from the challenge," the Bharatiya Janata Party (BJP)'s Hindutva icon, who was severely criticised for his government's handling of the andemic, added as quoted by NDTV.

Quite contrary to the claims made by the Chief Minister, controversy was courted after several videos had caught dead bodies being dumped from bridges besides some corpses were seen floating in river Ganga.

However, Prime Minister Narendra Modi stood beside his party colleague Adityanath praising him over the state government's handling of the pandemic.

Uttar Pradesh, which had witnessed a landslide victory of the BJP in 2017, will be polled in seven phases from Feb 10 to Mar 7.

The BJP, whose campaign is spearheaded by Modi, Union Home Minister Amit Shah and Adityanath, is facing a reasonable resistance this time from its main challenger Samajwadi Party and its chief Akhilesh Yadav with the marginalisation of other forces including the Congress.