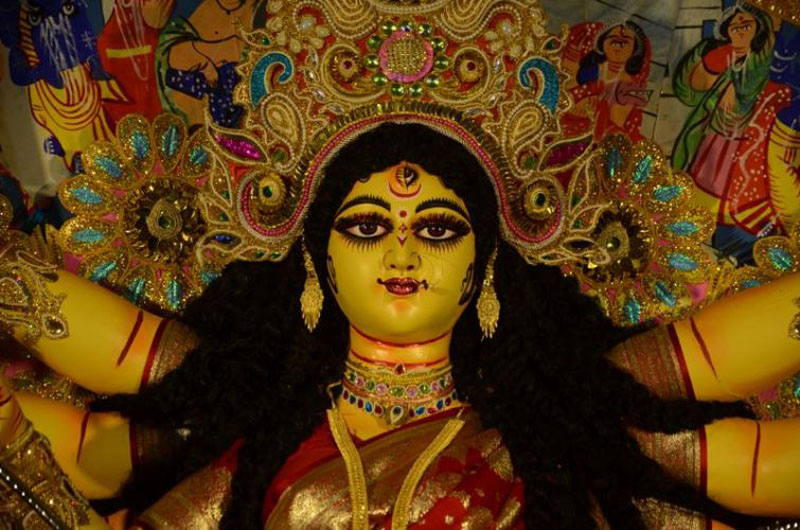 Her comments came as around 100 people were arrested in different districts in connection with the violence unleashed on Durga Puja pandals and temples across Cumilla following reports that "the Holy Quran was demeaned" at a puja pandal.

Teams of Border Guard Bangladesh (BGB) have been deployed in Cumilla, Narsingdi, Munshiganj and 19 other districts to ensure security during the Durga Puja celebrations.

"Those who carry out such incidents will definitely be traced out as we did in the past. Exemplary punishment will be given to them irrespective of their religions so that none can dare to do so in future," she said.

Hasina made the comment while exchanging greetings with leaders of the Hindu community being connected virtually with the Dhakeshwari National Temple marking the Sharodia Durga Puja from her official Ganabhaban residence here.

Terming the incident of vandalising temples in Cumilla "very unfortunate", Sheikh Hasina said, "Massive investigation is going on into the matter. We're getting much information (regarding the incident). This is an era of technology and those involved in the incident will definitely be found out using the technology."

"Religion is for individuals and festival is for all and we enjoy every festival together," she said.

The instances of vandalism at Durga Puja pandals and temples across Cumilla were reported following a rumour circulated on Facebook and other social media alleging besmirching of the Quran at a puja venue.

She called upon the Hindu community leaders, particularly those of the Bangladesh Puja Udjapon Committee, to formulate a policy to determine how many Puja mandaps will be set up across the country to celebrate Durga Puja keeping in mind the constraint of security personnel to ensure safety and security of the mandaps.

Hasina urged the Hindu community people not to consider themselves as minority people and perform their religious rituals with the same rights enjoyed by followers of other religions as they are born and brought up in the country and fought shoulder to shoulder to liberate it during the Liberation War.

Meanwhile, the authorities have imposed Section 144 in Hajiganj following the violence and deployed two platoons of the BGB to restore law and order.

Administration officials in Chandpur and Cumilla formed separate committees to investigate the violence in the districts. Cumilla Deputy Commissioner Kamrul Hasan said a three-member committee has been formed and asked to submit a report within three days.

At least 13 temples, idols in those temples and 40 businesses of Hindu people were vandalised in five districts. Around 95 people were injured during the time.

Home Minister Asaduzzaman Khan held a high-level meeting with the cabinet secretary and heads of different law enforcing and intelligence agencies at the ministry.

Massive attacks on Durga Pujo Pandals and Hindu Temples all over Bangladesh , Muslim Mobs attacking and destroying temples and Pandals. These visuals are from Chandpur pic.twitter.com/I7s7RyPJW8

He said several individuals were identified in connection with the incident in the Puja Mandap in Cumilla and they will be arrested soon.

The home minister added that those spreading rumours on social media will also be brought to book.

We failed. We could not worship at the historic Sankhannidhi Temple on Tipu Sultan Road in Dhaka. The local extremists did not allow us to do pujo. The government has given a temporary place to worship. The idols are being transferred there. One day we will rescue our temple. pic.twitter.com/nIGflELuFa

In Bandarban, at least 25 people including 10 policemen were injured in a clash between a mob and law enforcers in Lama Kendrio Hori Mandir.

The clash ensued when several hundred religious fanatics attacked the temple around 11 am.

4th incident. Vandalizing the pratima again. This incident took place at Rastampur village of Ashulia in Savar upazila of Dhaka this evening. We are drawing the attention of all the puja mandapa authorities and volunteers so that they take care of the temple’s own security. https://t.co/UYOGJBauBT pic.twitter.com/SIDXfum6Jo

We would like to say to all Muslim brothers, do not believe the rumors. We respect the Qur'an. There is no need for Qur'an in Durga Puja. This is someone conspiring to cause a riot. There will be a fair investigation. Please don't attack any more temples & Hindus. pic.twitter.com/UzrLRtGePk

In Noakhali, villagers attacked two temples in Hatiya and one in Begumganj on Wednesday morning. Police have so far arrested five people in connection with the attacks.

All Hindus in Comilla are being instructed to be alert . Stay in the temple together. We are appealing to the Bangladesh Police for help in nanua dhighir par area .

In Rajshahi's Bagmara upazila, 10 individuals, including a policeman, were injured in a clash between a mob and the police.

There were clashes in Chattogram, Kurigram and Moulvibazar on Wednesday, where Hindu idols and temples were vandalised.

Meanwhile, Bangladesh Puja Udjapan Parishad in a statement yesterday urged Hindu people across the country to observe sit-ins at each Durga Puja mandaps today for three hours from 11 am in protest of the attacks.