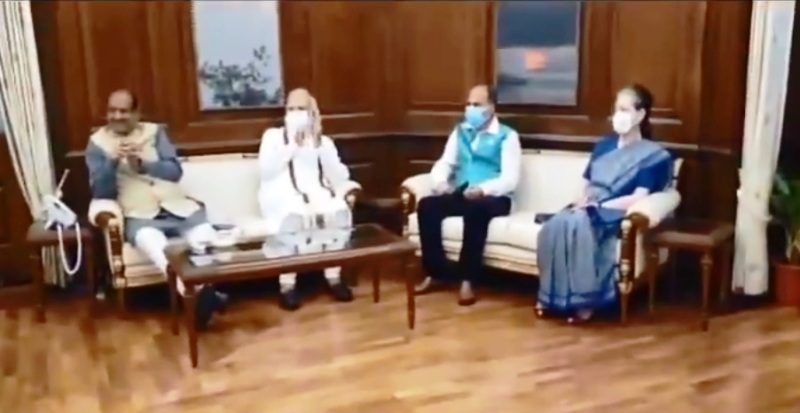 New Delhi/IBNS: Prime Minister Narendra Modi and Congress President Sonia Gandhi were on Wednesday present at a meeting of all political parties' leaders called by Speaker Om Birla at his room in Parliament after the monsoon session ended this morning, two days early.

PM Modi and Sonia Gandhi sat on adjoining sofas in the meeting, visuals from the meeting showed.

Almost all the days were adjourned in the monsoon session as the Opposition staged protests on a number of issues.

However, the meeting seems to be a cordial one which was evident from the smiling face of Speaker Om Birla.


NDTV quoting sources reported that the Speaker urged all parties to cooperate with the functioning of the house in future.

Both Houses of the Parliament witnessed repeated adjournments during the monsoon session and several bills were passed in din.

The Opposition had put up a united front against the government over Pegasus snooping controversy, farm laws, price rise, and other issues.

"I am hurt by the fact that the proceedings of the house did not take place per expectations in this session. I always make an effort to see that maximum business takes place in the House and discussions are held over issues related to the public. But there was continuous obstruction this time. This could not be resolved," Birla told the media.

The monsoon session of Parliament, which started on July 19 was scheduled to end on August 13, but was cut short amid continuing protests.