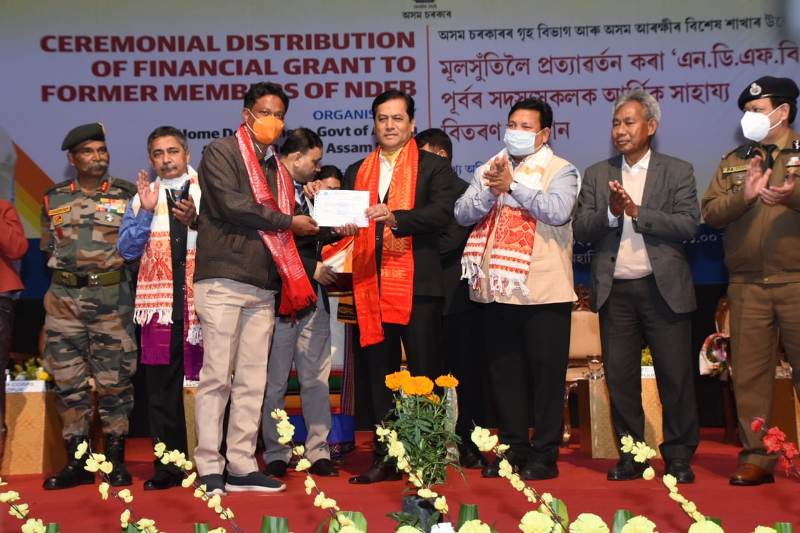 Guwahati/IBNS: Assam Chief Minister Sarbananda Sonowal on Tuesday inaugurated the distribution of financial aids to surrendered members of militant organisation NDFB at a function held at GMCH auditorium in the city.

Notably, out of total 1615 members of all four NDFB surrendered factions, 1279 were provided Rs 4 lakh fixed-term deposit certificates each and rest of the members would also be provided the same after completion of the necessary processes.

Ceremonially handed over financial grant of ₹ 4 lakh each to 1,279 former NDFB cadres in Guwahati. I applaud their decision to return to the mainstream & believe that this grant will lead them to contribute further towards growth of Assam. #TerrorismFreeAssam pic.twitter.com/bKfRT6KLjM

Addressing the surrendered militants at the programme organised by the Home Department, and Assam Police, Chief Minister Sonowal urged the surrendered members of the militant organisation to make a fresh start in life and assured that the Central and State Governments, BTC administration and the people would always extend their support in this endeavour.

He also called on them to utilise the financial assistance judiciously and said that fixed-term deposit certificates would enable them to take bank loans for agriculture, livestock farming, setting small industries etc apart from taking advantage of various government schemes. Sonowal assured of giving necessary directions to banks from administration for the purpose while providing skill development training to today’s financial assistance recipients.

Hailing the Bodos for their work culture and bravery, Sonowal called on the youths of the tribe to work for the society with their abilities and talents and strive for strengthening peace and harmony among all sections.

He also remarked that historic BTR Accord generated a lots of hope among the people of Assam and he thanked Prime Minister Narendra Modi and Union Home Minister Amit Shah for bringing the accord to fruition while reiterating state government’s commitment towards timely implementation of the accord.

The Chief Minister also informed that the State Government has already given written submission in the Gauhati High Court for reducing the pending cases against the surrendered militants according to laws so that they can live a life of dignity and the judiciary is requested to set up a special court for speedy disposal of the cases.

The Chief Minister informed that the State Government has already taken the decision to bring the militants and their family members under Atal Amrit Abhiyan for providing medical treatment.