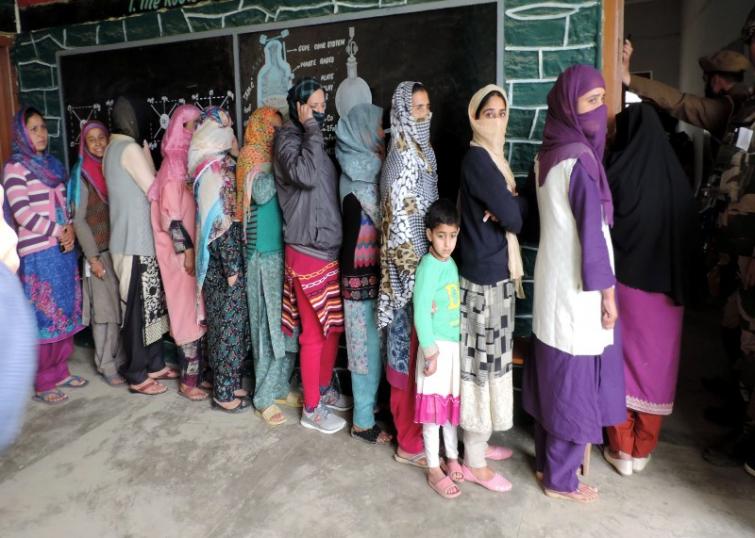 Guwahati, Apr 11 (UNI): More than 67 percent voters exercised their right to franchise in five Lok Sabha constituencies of Assam that went to the polls in the first phase on Thursday.

As per the source, Tezpur recorded 70 per cent polling, Kaliabor 64 per cent, Jorhat 72 per cent, Dibrugarh 69 per cent and Lakhimpur 62 per cent, putting the overall percentage at 67.4 till 5 PM.

Long queues remained at polling stations even after the official close of voting time at 1700 hours and the final polling figure is likely to increase.

Reports of malfunctioning of EVMs were received from some polling stations, the source said.

While in most cases polling continued after the machine was replaced, repolling will be ordered in a few polling stations.

The fate of 41 candidates, including two women, were sealed in the EVMs with voters queuing up in front of most of the polling stations even before voting started at 7 AM, with clear weather encouraging voter turnout.

The fate of three sitting members of Parliament, Gaurav Gogoi of Congress (Kalibaor), Rameswar Teli of BJP (Dibrugarh) and Pradan Boruah of BJP (Lakhimpur) was sealed in the EVMs.

Former Union Minister Pawan Singh Ghatowar of Congress is also in the poll battle on Thursday, with other prominent contestants in the first phase being state ministers Pallab Lochan Das and Topon Kumar Gogoi (both BJP) in Tezpur and Jorhat respectively, retired IAS MGVK Bhanu (Cong) in Tezpur, Monimadhab Mahanta(AGP) in Kaliabor, and Sushanta Borgohain (Cong) in Jorhat.

Chief Minister Sarbananda Sonowal and former CM Tarun Gogoi were among the voters who participated in the polling process in the first phase.

Altogether 180 companies of security forces were deployed, and at least one constable was attached to every polling station.

As many as 42126 polling personnel were engaged for first phase poll and 614 micro observers appointed.

The BJP had won four of the seats in 2014 General Elections, while one was bagged by Congress.

Polling for five more seats in the state will take place in the second phase on April 18 and for remaining four seats on April 23.

Counting of votes will be undertaken on May 23.