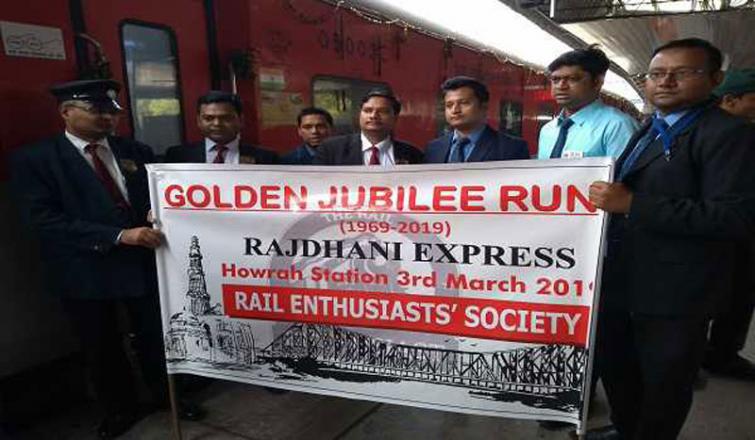 The flower-decked train reached at New Delhi Railway Station at 1145 hrs on its golden jubilee run. The passengers were greeted and were duly taken care by the Northern Railway staff.

a team of Railway officers led by CRSE, Coaching Northern Railway Shalendra Singh received the train at the station with flowers and laddoos for them.

Members of the Rail Enthusiasts' Society travelled in the train to celebrate the Rajdhani's 50th anniversary.

A member of the Society, Subho, sought improvement in railway's food quality and provision of better facilities from the Railway Minister.

He said,"Being a passenger, every one wants better facilities by saving his time and money. Now, the airways is cheaper than railways, if we compare with the fare charge of Vande Bharat that is around Rs 3,300 to 3,500. So, railways should cater to basic facilities, besides cheaper and convenient travel for passengers."

In 1969, Rajdhani Express service was started from Howrah on 3 March. The high-speed train covered the 1,450-kilometre stretch in 17 hours and 20 minutes.

The first fully air conditioned train, on its maiden trip, was hauled by diesel locomotive on its entire route.